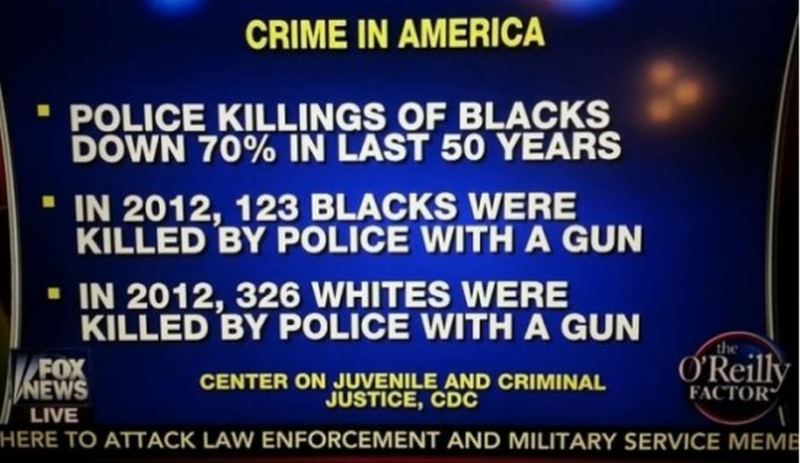 Ferguson protesters around the nation continue to rail against police, claiming there’s massive injustice in the way law enforcement treats blacks. Even Eric Holder is on the bandwagon, claiming last night in Atlanta that the police were seen as occupying forces by their communities.

According to some eye opening statistics, that’s not exactly true.

For every black killed by the police, 3 whites will share the fame fate.

Talking Points” has documented how rare police killings of Americans really are no matter what the color. 99.9 percent of all police arrests do not result in a fatality.

But the racial agitators are having none of that. Writing in “The New York Times” yesterday, Georgetown University professor and MSNBC analyst Michael Eric Dyson says, quote, “As for the plague of white cops who kill unarmed black youth, the facts of which are tediously and sickeningly repetitive and impose a psychological tariff on black minds, the President was vague, halting and sincerely noncommittal.” Dyson went on to call President Obama a traitor to his race for not siding with the violent demonstrators who in Dyson’s view have a legitimate right to destroy at will.

Let’s take a good look at this plague of white cops acting violently against blacks as Dyson puts it. In the past 50 years, the rate of black Americans killed by police has dropped 70 percent. In 2012, 123 African- Americans were shot dead by police. There are currently more than 43 million blacks living in the U.S.A. Same year, 326 whites were killed by police bullets. Those are the latest stats available.

In 2013, blacks committed 5,375 murders in America; whites committed 4,396. Whites comprise 63 percent of the population; blacks 13 percent. So, anyone — anyone thinking clearly can see that the homicide rate among blacks way out of proportion thus, the police intrusion into black precincts. Since, in a whopping 90 percent of black homicides, the dead person is another black or the offender himself.