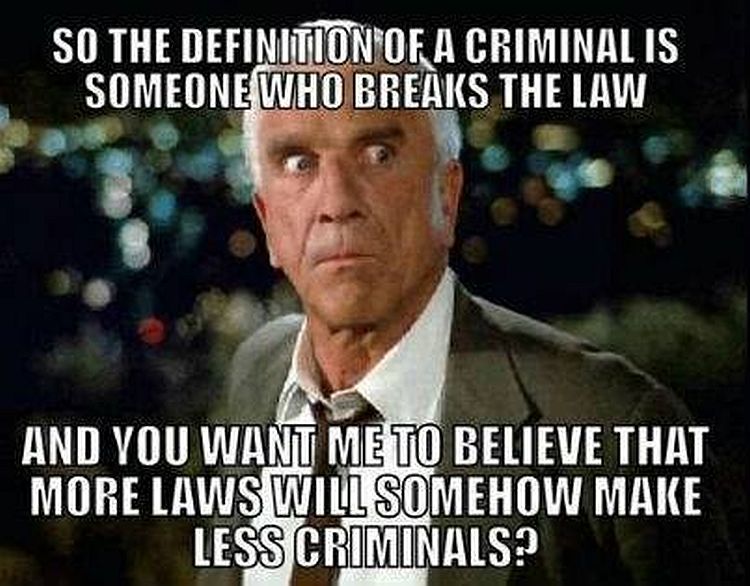 How does having more law make fewer criminals? Anyone?

You can’t legislate away societal ills, contra- Regressive logic. But don’t let that stop them.

Soon after any shooting that makes national news in this country, Democrat politicians are screaming for gun control. The Democrats’ reaction to the Orlando shooting is no different.

Hillary Clinton made a public statement just hours after the Sunday morning shooting, calling it an act of terror and then called for increased gun control.

“We need to keep guns like the ones used last night out of the hands of terrorists or other violent criminals,” she wrote. “This is the deadliest mass shooting in the history of the United States and it reminds us once more that weapons of war have no place on our streets.”

President Obama also made a public statement, and while he didn’t openly call for more gun control, he did call for it in a roundabout way.

“Today marks the most deadly shooting in American history, Obama said. “The shooter was apparently armed with a handgun and a powerful assault rifle. This massacre is therefore a further reminder of how easy it is for someone to get their hands on a weapon that lets them shoot people in a school, or in a house of worship, or a movie theater, or in a nightclub. And we have to decide if that’s the kind of country we want to be. And to actively do nothing is a decision as well.”

Now another Democrat has joined in the call for gun control and he’s blaming Congress for the Orlando shooting. “This phenomenon of near constant mass shootings happens only in America – nowhere else,” Murphy said.

He continued: “Congress has become complicit in these murders by its total, unconscionable deafening silence. This doesn’t have to happen, but this epidemic will continue without end if Congress continues to sit on its hands and do nothing – again.”

Senator Murphy has been one of the most vocal in Washington concerning gun control in recent years. He represents the district that contains Newtown, the scene of the mass shooting of school children in 2012. But remember, Connecticut has some of the most restrictive gun laws in the country and they didn’t stop Adam Lanza from killing his mother and stealing her guns.

“I know the pain and sadness that has brought too many communities – Newtown, Oregon, Aurora, San Bernardino, and now Orlando – to their knees,” Murphy said, “and I can only hope that America’s leaders will do something to prevent another community from being added to the list.”

Typical of most Democrats, Murphy blames the guns and Republicans instead of the people who actually do the shooting. If the Democrats ever succeed in making guns illegal in this country, who or what will they blame when shooting incidents don’t disappear?