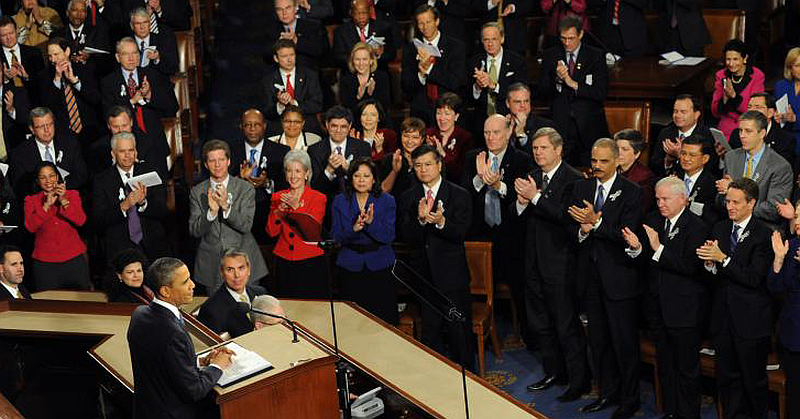 For decades, those who have been paying attention know that the Democratic Party has gradually become more and more hostile to individual freedom. From Woodrow Wilson to FDR, from LBJ to Barack Obama, the American Left has led a full-frontal assault on individual liberty.

Starting with the Progressive movement in the early 20th century, Democrats (and some Republicans too) began to enact big government policies with the hope of curing all society’s ails. According to Progressives, the solution to any problem is more government control over it.

Fast-forward 100 years later, to the early 21st century. We now find that Progressivism is not only alive and well, but that it has evolved into a far more sinister movement. As time has progressed, and as government power has increased, Progressives have become intoxicated with and addicted to this power.

As the snowball of government power increases, so does the strength of the addiction. The addiction has become so strong that the Democratic Party, the bastion of the Progressive movement, has officially become the party of fascism in the United States.

When you think of fascism, often the images of Adolf Hitler come to mind; and along with it, Leftists accusations that fascism is a purely right-wing ideology. However, that could not be further from the truth.

One of the key components of both fascism and socialism is control and direction over the means of production, also known as central planning. Control of the economy by government bureaucrats in pursuit of some goal is carried out in the exact same manner by both socialists and fascists.

Not only do both have economic control, but they also have the same enemies: the bourgeoisie. Think Hitler was a friend of capitalism? Wrong!

We are socialists, we are enemies of today’s capitalistic economic system for the exploitation of the economically weak, with its unfair salaries, with its unseemly evaluation of a human being according to wealth and property instead of responsibility and performance, and we are all determined to destroy this system under all conditions.

Fascism and socialism are two species of the same genus, two wings of the same authoritarian bird. And that bird is alive and well today, fighting against the American eagle in a cosmic battle for freedom.

An important aspect of fascism (and socialism as well) is that the State is the ultimate power in the universe. Everything becomes subservient to it. Individual rights become irrelevant, limits on power are destroyed. This happened in Germany under the Nazis, and it is happening in the United States under the Democratic Party. Let’s take a look at some of the recent examples that we have covered at The Federalist Papers Project that confirm their fascist transformation.

First, Senator Chris Murphy of Connecticut stood on the Senate floor for 15 hours demanding that the Senate vote on new gun control laws in response to Orlando terrorist attack.

Democrats see this as a winning issue, but make no mistake: Denying American citizens their fundamental rights based merely on being “suspected” of committing a crime is a very dangerous precedent. Nobody wants terrorists to have guns, but “suspected terrorists?” Who are those? And who decides who’s a “suspect”? They certainly haven’t been convicted in a court of law and – by definition – are still presumed innocent, aren’t they?

Murphy and several other Democratic Senators literally held the floor demanding that people only suspected of terrorism be denied fundamental rights. Not arrested, not indicted, not convicted; merely being on a secret watchlist.

Second, along that line of thought, Senator Dianne Feinstein had chilling remarks about the terrorist watch list and what a person should do if accidentally placed on one.

Forget due process, because according to Sen. Dianne Feinstein, it rests on Americans to “prove their innocence” if they desire to purchase a firearm.

This brings us to a bill proposed by Feinstein that “would effectively strip away the 2nd Amendment rights of any Americans wrongfully placed on the terror watch list, flipping on its head the essential concept of ‘innocent until proven guilty,'” according to The Daily Wire.

Unbelievable! Feinstein wants the burden of proof placed on YOU, the accused. Because the centuries of jurisprudence regarding rights of the accused don’t matter in the Democratic Party. You can be placed on this list, not know about it, be denied the right to own a gun, then be required to prove that you are not a terrorist. This is insane!

But they’re not done yet…

Third, let’s say you’re on that list. Why are you there? What in God’s name did you do now (beside posting anti-Obama stuff on Facebook)? Well, maybe you didn’t do anything at all, and you’re a direct victim of big government.

Federal Air Marshals are putting completely innocent people on government terrorist “watch lists” merely to keep up with quota set up by their superiors.

“Innocent passengers are being entered into an international intelligence database as suspicious persons, acting in a suspicious manner on an aircraft … and they did nothing wrong,” one marshal told the station.

These completely innocent passengers end up on a secret government document called a “Surveillance Detection Report” (SDR). The quota system and secret documents are still being used today.

Keep in mind that liberals in Washington have decided the only way to protect us from terrorism is to deny the Second Amendment right to citizens who are arbitrarily placed on secret government lists like this.

Oh my God! This is literal lunacy! Just so they can get raises and bonuses and meet QUOTAS? What is not fascist about that? But is that enough? Absolutely not.

What if this system was overhauled due to a new wave of lawmakers being elected. What if the people had enough of this fascist garbage and elected liberty-minded candidates who shut this down? Well, the propaganda arm of the Democratic Party, the mainstream media, suggest something like this:

The older you were, the more likely you were to vote in favor of “Brexit,” or the United Kingdom leaving the European Union.
Since the media doesn’t like this, they’ve come up with a novel idea: Ban older people from voting.

Ban people from voting? What happened to democracy and universal suffrage? Out the window when the people say not to globalism or authoritarianism. Disenfranchisement because of disagreement with the results: that is a fascist move.

Finally, let’s say you’re STILL protesting this. Let’s say that you just can’t keep your mouth shut and keep calling out authoritarianism for what it is. Well if the Democrats get their way, they can prosecute you for disagreeing with them, First Amendment be damned!

In their official party platform, Democrats have taken a page right from North Korea.
They’ve taken the official position that companies who disagree with them on climate change should be prosecuted by the Justice Department.

What this amounts to is a total shredding of the First Amendment, for they are calling for the silencing of global warming critics under the threat of criminal charges.

“The Committee unanimously adopted a joint proposal from Sanders and Clinton representatives to commit to making America run entirely on clean energy by mid-century, and supporting the ambitious goals put forward by President Obama and the Paris climate agreement.,” their website reads. “Another joint proposal calling on the Department of Justice to investigate alleged corporate fraud on the part of fossil fuel companies who have reportedly misled shareholders and the public on the scientific reality of climate change was also adopted by unanimous consent.

Is it clicking yet?

I could list countless other things the Democrats want, but this is just in the last several weeks (and this isn’t even exhaustive). The Democratic Party really has completely flown off the handle and is now America’s own party of fascism.

“So this is how liberty dies, with thunderous applause…”