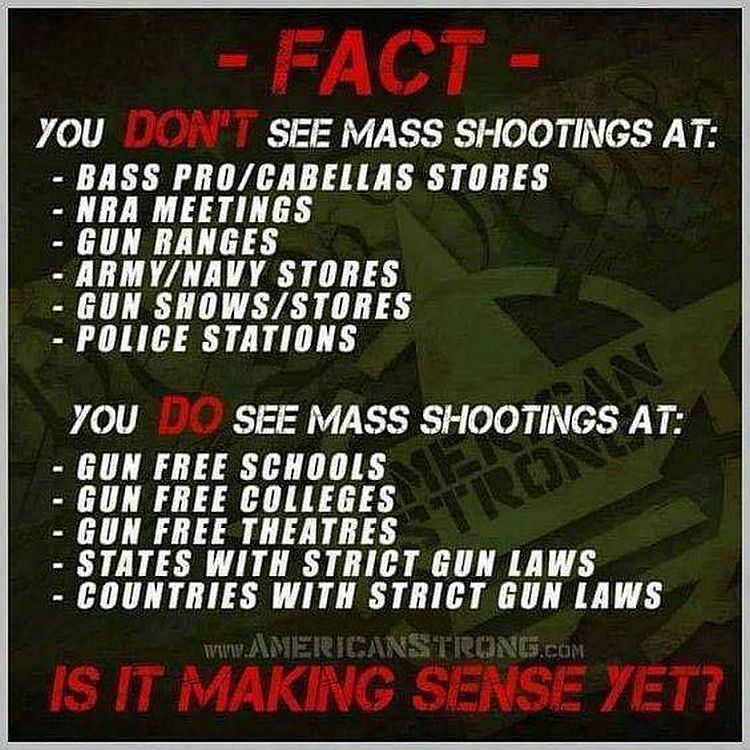 Not only do the gun-grabbers want to restrict the places where we can carry our firearms for self-defense, but they also skew numbers in order to make gun-free zones look safer than they actually are.

According to the Crime Prevention Research Center:

Everytown for Gun Safety’s recent report on mass shootings contains many errors. In addition, it muddies the discussion on mass public shootings by including shootings in private homes along with ones in public places, and the vast majority of the cases they include are in private homes. But there is a distinction between what motivates mass public shooters who are committing their crimes to get media attention and those who engage in attacks in private residences.

There are three mass public shootings since at least 1950 that have not been part of some other crime where at least four people have been killed in an area where civilians are generally allowed to have guns. These are the International House of Pancakes (IHOP) restaurant in Carson City, Nevada on September 6, 2011, the Gabrielle Giffords shooting in Tucson, Arizona on January 8, 2011, and [UPDATE] the Kalamazoo shooting on February 20, 2016 where four people died in one attack at a Cracker Barrel restaurant and two others in another one (while the Cracker Barrel restaurant didn’t ban guns, Uber does ban its drivers from carrying guns and the killer was on the job when he did the shootings and the shooting was done while he was in his car).

The FBI definition of mass public shootings excludes “shootings that resulted from gang or drug violence” or that were part of some other crime. The FBI also defines “public” places as “includ[ing] commercial areas (divided into malls, businesses open to pedestrian traffic, and businesses closed to pedestrian traffic), educational environments (divided into schools [pre-kindergarten through 12th grade] and IHEs), open spaces, government properties (divided into military and other government properties), houses of worship, and health care facilities.”

There you have it. Proof that the gun-grabbers on the Left are not using the truth to back up their agenda. If they have to twist and distort information to get their ideas implemented, then they must not be very good ideas.

As responsible gun owners and Second Amendment advocates, we know that more guns in the hands of legal gun owners means less crime. Just as Seth Connell reported, as Americans have been buying more guns, crime has been plummeting.

Let us not give in to gun-grabbers under ANY circumstances. Our safety and our children’s safety is at stake.

The Left, especially Millennial Leftists, are screaming for their safe spaces whenever they get offended. Well, there’s no safer space than where a law-abiding American is carrying a firearm responsibly.

Let us not lose that.