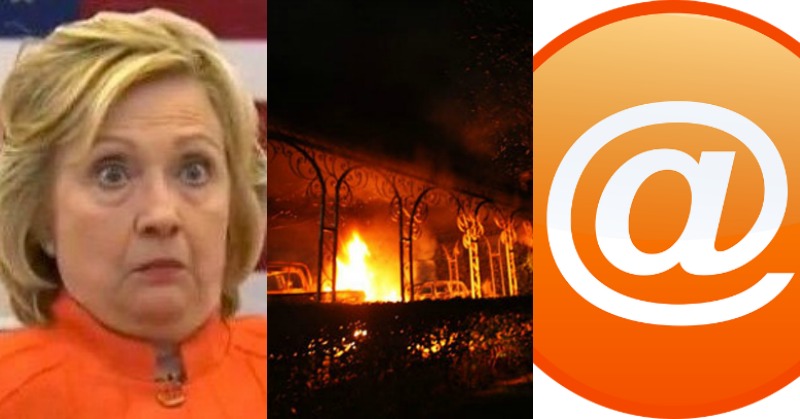 Democrat presidential nominee and former Secretary of State Hillary Clinton claimed that she turned over all work related emails, and that the only ones her lawyers deleted were about personal matters such as yoga routines and her daughter’s wedding. Add that to the list of big, fat Clinton lies.

The AP reported that the State Department has admitted that there are around 30 emails retrieved by the FBI during their investigation into Clinton’s private basement server that may relate to the 2012 terrorist attack in Benghazi, Libya that took the lives of four Americans.

There was a time when the left mocked and laughed at conservatives who claimed that one of the major reasons why Clinton’s emails were important is because of the potential for information about her involvement in the Benghazi terror attacks.

Not so funny now, is it?

On Tuesday before U.S. District Judge Amit P. Mehta, government lawyers admitted that some of the 30 emails retrieved were not included as part of the 55,000 documents Clinton handed over.

The lawyer for the State Department claimed it would take a month to review the emails before they could be released. But Mehta wasn’t having it, and required that they produce a report in a week to explain why it would take so long.

The FBI uncovered 14,900 emails that Clinton did not turn over and has since handed them to the State Department. Thanks to a FOIA suit, these emails are set to be released.

Judicial Watch has also submitted 25 questions to Clinton requiring her to explain why she chose to use a private server in her basement instead of a government email account for official business.

U.S. District Judge Emmet G. Sullivan ordered Clinton to answer these questions this month, which was not quite what Judicial Watch wanted — the group wanted to depose Clinton in person rather than in writing.

According to an anonymous official who spoke to the AP, the FBI is also set to release documents relating to the investigation, including the interview that they conducted with Clinton. This interview occurred just before FBI Director James Comey declined to recommend indictment for the former Secretary of State — while admitting that she had been “extremely careless.”

Whether there’s a smoking gun in any of this doesn’t matter, although it certainly wouldn’t hurt. Clinton lied time and time again, and this latest information is just more proof of it.

The fact that there was any information pertaining to Benghazi at all in the emails is proof of a huge lie on the part of Clinton, and may be crucial in the attempt by Congress to prove that Clinton perjured herself.