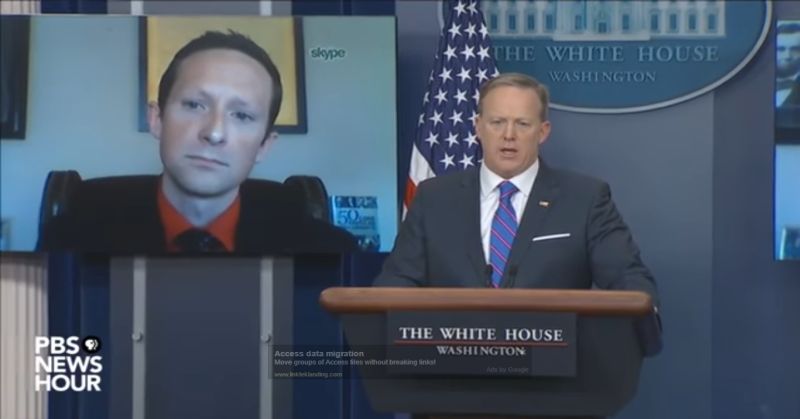 We are extremely grateful to the White House for allowing us access to today’s event. But, more importantly, we want to thank our readers and fellow citizens for making a conversation with the White House possible. Without you, none of this would have been possible.

The main topic of the day, of course, was the resignation of Michael T. Flynn as National Security Advisor.

Well, that and Valentine’s Day.

But there was no love for Secretary Spicer from the press.

Here’s the text of my question:

Thank you. What our readers at The Federalist Papers Project are most interested in is returning the country to the first principles of republican government, as understood by the American Founders. One of those principles, in the Declaration of Independence, is “the consent of the governed.”

So my question is this:

What are the President’s future plans for rolling back the expensive and burdensome regulations of the administrative state, most of which are the product of unelected, unaccountable bureaucrats who never received “the consent of the governed” to do anything, let alone make law.

MSNBC personality, Rachel Maddow, was none too happy about it. Here’s what she retweeted on her Twitter feed:

The website that just asked Spicer a question is this pic.twitter.com/cTmhz1dCps

Admit it: You’re really curious about why that school district banned forks now, aren’t you?

Although I didn’t get a very direct answer to my question, I was very happy to seethis, issued later that same day.

Here’s the whole video. Jump to the 35:35 mark for my question, and Spicer’s response.

Dr. Jason Stevens
Dr. Jason W. Stevens has been a Professor of Politics since 2010.
The Federalist Papers Project Goes To The White House
Why I Don't Celebrate Presidents' Day
See more...