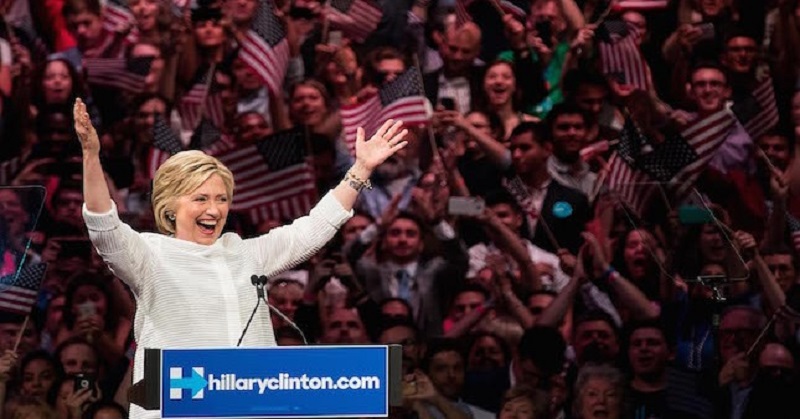 At the foundation of our civil liberties lies the principle that denies to government officials an exceptional position before the law and which subjects them to the same rules of conduct that are commands to the citizen. — Justice Louis D. Brandeis

At 11 am Eastern Time, FBI Director James Comey made known to the press the agency’s decision about the investigation into Hillary Clinton.

FBI Director James Comey said Hillary Clinton’s use of a private email server while Secretary of State was “extremely careless” but he is not recommending criminal charges.

The decision came not so much a surprise as an outrage for many who believe that Clinton is the perfect candidate for prison in 2016. Despite overwhelming evidence of which even the media has possession, such as the destroying of daily schedules against federal law, the FBI had decided not to recommend that the Department of Justice bring an indictment on the presumptive Democratic nominee.

And if you think that Loretta Lynch will bring the hammer down on Clinton, you haven’t been paying attention.

Lynch will not order the DOJ to bring and indictment, because she, Clinton, and Obama are members of the elite political class. The decision not to recommend that criminal charges be filed truly shows that the Rule of Law is taking its final breaths here in the United States.

The Rule of Law is an unwritten legal principle that is the cornerstone of the foundation of freedom. It is an invisible attribute that is known to few, and championed by even fewer. It is the very hinge upon which the door of liberty swings.

Where there is no Rule of Law, there is no freedom, period. A free society cannot exist where the Rule of Law is not enforced. So what exactly is this theory, and why is it so important?

The Rule of Law is, in essence as simple as one of the first rule you ever learn in elementary school: everyone needs to follow the rules. From a young age, the idea of the Rule of Law is driven into our heads by almost all of our authority figures.

Hayek was a Nobel Prize Winning Economist in the 20th century. He lived under the rule of the Nazis in Germany, and extensively wrote about the decline of freedom in Germany in his famous book The Road to Serfdom.

Nothing distinguishes more clearly conditions in a free country from those in a country under arbitrary government than the observance in the former of the great principles known as the Rule of Law. Stripped of all technicalities, this means that government in all its actions is bound by rules fixed and announced beforehand—rules which make it possible to foresee with fair certainty how the authority will use its coercive powers in given circumstances and to plan one’s individual affairs on the basis of this knowledge… While every law restricts individual freedom to some extent… under the Rule of Law the government is prevented from stultifying individual efforts by ad hoc action.

I know, that was a mouthful, so let’s dissect it a bit.

First, free countries vs. arbitrary countries: in a free country, the government acts in predictable and known ways in regards to certain things that individuals do. No matter who the person is, the State’s reaction to that action must, as a general rule, be the same in every similar circumstance.

In a State that abides by the Rule of Law, that agent would receive the same murder charge as citizen X because, in both cases, an unlawful homicide took place. But when the government gets to decide who will or will not be held responsible when crimes are committed, freedom is in imminent dangers.

And why is this? Because in order for there to be freedom in a given society, the government has to act according to the limits a Constitution places upon it. Sure there can be a Constitution that prescribes and proscribes certain actions, but if the government decides if it wants to follow those limitations, then the society which it governs is not free.

Let’s take gun rights for example (and we don’t even have to look too far for an example here in the United States). In most states, you and I have the right to bear arms whether we are in our homes or out in public. Most require a permit to carry a handgun concealed in public, but these states are “Shall-Issue,” and if you pass the background checks and submit proof of competence with a handgun, you will receive the permit.

Now let’s go to New York City, a bastion of fascism. In NYC, there is the “right” to bear arms, but not really. If you want to own a handgun, you need to apply for a permit, and pay an application fee of several hundred dollars. Then, if you want to carry it in public, you need to demonstrate a “good cause” to do so (usually showing some sort of proof that your life is in immediate danger). Okay, so you submit to all this bureaucracy; what next?

You are denied. Perhaps your life is legitimately in danger, perhaps there is a Mafia hit on you, or ISIS has your name on a kill list. But you are still denied. Why? Because, in reality, are not a member of the political class, and do not have the clout necessary to “deserve” a carry permit.

This is why the Rule of Law is necessary for freedom. Lady Justice is supposed to hold the scales with eyes covered, thus delivering justice with impartiality. In places like Nazi Germany, Soviet Russia, and even New York City, the government determines who has certain rights, and grants them more generously to friends of the political class.

And now, in 2016, the FBI has caught the virus of lawlessness. The FBI will not bear the consequences for this, though. No, that will be borne by plain citizens like you and me.

So, why was Hillary not recommended for indictment? Because she is the political class, and her tentacles wrap around all over the District of Columbia and any agency connected to it. She has friends in every agency, and her foes likely end up with two in the back of their heads with a suicide ruling on the cause of death.

If an intern at the State Department deleted any files containing ANY sort of information like Hillary possessed, even if from a State.gov email account, without proper authorization, what would happen to our up and coming intern? Federal prison for a few decades, probably.

18 U.S.C., Section 793-F states: “Whoever, being entrusted with…national security documents… through gross negligence permits the same to be removed from its proper place of custody… shall be fined under this title or imprisoned not more than ten years, or both.”

Hillary’s actions fit this definition, intent to do so or not. She broke federal law, plain and simple. If anyone else, any regular citizen committed this act, it would be off to prison. Game over. Go directly to jail, do not pass GO, do not collect $200.

But since Queen Hillary did the act, the law does not apply to her. Since it was the Almighty Hillary that exposed classified information over an insecure email server, she will face no repercussions. And since she will never see the inside of a jail cell, another large chunk at the cornerstone of freedom, the Rule of Law, has been hammered out of the very foundation of the Constitution.

How many more gasps of air does the Rule of Law have left in her lungs? Hopefully more than Hillary does.