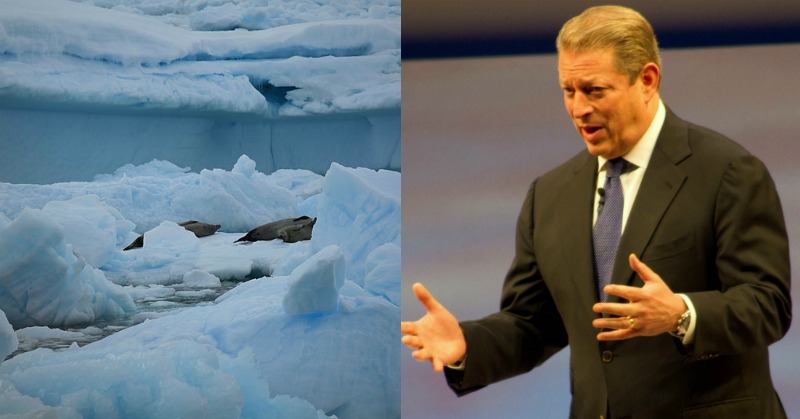 You know how the left likes to claim that the ice is melting and we’re all going to die if we don’t buy carbon credits? Well, reports have shown that in 100 years’ time, the ice level in the Antarctic Sea hasn’t really changed much.

Antarctic sea ice had barely changed from where it was 100 years ago, scientists have discovered, after poring over the logbooks of great polar explorers such as Robert Falcon Scott and Ernest Shackleton.

Experts were concerned that ice at the South Pole had declined significantly since the 1950s, which they feared was driven by man-made climate change.

But new analysis suggests that conditions are now virtually identical to when the Terra Nova and Endurance sailed to the continent in the early 1900s, indicating that declines are part of a natural cycle and not the result of global warming.

And in 2009, Al Gore announced ‘there is a 75 per cent chance that the entire north polar ice cap, during the summer months, could be completely ice-free within the next five to seven years.’

But the missions to the Arctic were hampered by bad weather, not open sea. And the dates by which climate scientists and politicians said the ice would disappear have come and gone, while the ice has remained.

Bob Walker, a senior advisor for Donald Trump’s campaign, told The Guardian that NASA’s climate change research, which he called “politicized science,” will be cracked down on in a Trump administration. Walker told The Guardian:

My guess is that it would be difficult to stop all ongoing NASA programs but future programs should definitely be placed with other agencies. I believe that climate research is necessary but it has been heavily politicized, which has undermined a lot of the work that researchers have been doing. Mr Trump’s decisions will be based upon solid science, not politicized science.

“We see Nasa in an exploration role, in deep space research,” Walker said. “Earth-centric science is better placed at other agencies where it is their prime mission.”

Good, let’s hope Trump does turn away from “politicized science” and stops the ridiculous, wasteful spending on the left’s pet project used to garner more control for the federal government — and make money for people like Al Gore.

The left smugly shoves climate change down everyone’s throat as if it is a fact, because they either don’t know what the difference between “theory” and “fact,” is, (or what evidence is, for that matter), or they simply don’t care and know that if they say it enough, people will believe it.

It’s probably a combination of both.