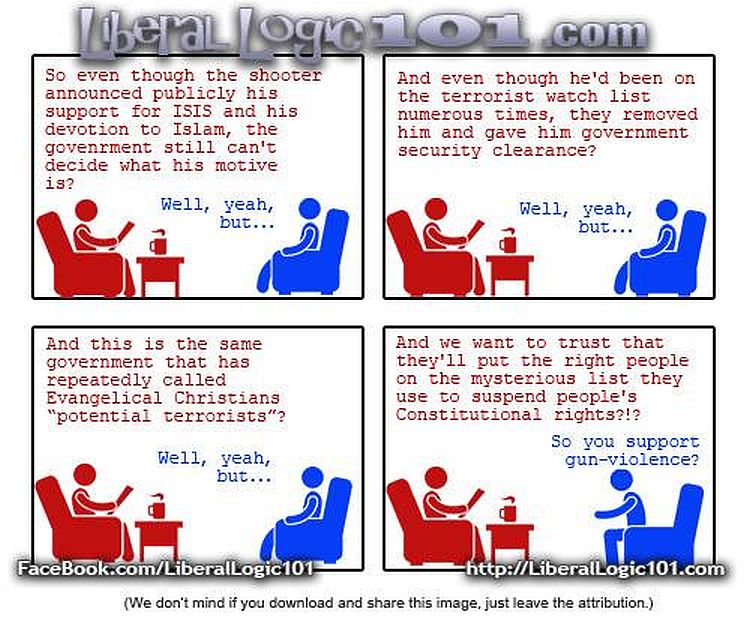 More and more evidence is pointing to government incompetence that enabled the Orlando terrorist attack. Yet anti-gun Leftists still want to take away guns from people who DID NOT commit the attack. This is insane!

Alicia Powe reports that the most common theme in mass killings, like the Orlando terrorist attack, is that the authorities have suspicions of the perpetrator’s intent, yet do nothing to prevent it.

Political correctness is to blame for the massive intelligence failure that allowed Islamic jihadist Omar Mateen’s success in carrying out the largest terrorist attack on American soil since 9/11.The Obama administration has evenpurged its counter-terror materials and programof any mention of Islam and jihad.

Mateen was the subject of two FBI investigations, one of which was dropped after Mateen claimed his co-workers were “Islamophobic.”

It is now confirmed that in addition to two investigations, Florida terror suspect Omar Mateen was also approached by FBI “informants.”

A local Florida law enforcement official reportedly spoke to media about the recent Islamic Orlando shooter and mentioned that the FBI had inserted a confidential human source (informant) into the life of the terrorist years before the recent Orlando attack occurred. Someone had reported that the shooter made Al Qaeda threats and the FBI allegedly inserted the informant to try and see if the man was seriously considering terror attacks against Americans. The report states that the man showed no interest in terrorism so the FBI removed the informant.

Left-of-center news outlets seized upon the possibly accurate revelations with far-stretched conspiracy theories. One of the outlets, Alternet, went as far as declaring that the shooter was driven to terrorism by the alleged encounter with the FBI informant many years before.

This is another detail the Obama Administration hoped America would never find out about.

The FBI had all the info needed to stop this worm, but did nothing. Based on how the Obama administration has neutered FBI counter-terrorism training, and its handling of the aftermath of the attack, the order probably came right down from the top.

The hands of law enforcement have been tied by the doctrines of political correctness.

Under Obama, the Department of Homeland Security is restricted from using words like jihad and sharia.

The FBI is even prohibited from surveilling mosques because it upsets Obama. Since October 2011, the government’s sweeping surveillance of our most private communications excludes the mosques, where homegrown terrorists are radicalized.

There were innumerable red flags evidencing Mateen as a psychotic danger, but under the reigns of Democrat leadership, if you see something and say something, you will be smeared as an Islamophobic-anti-Muslim-bigot.