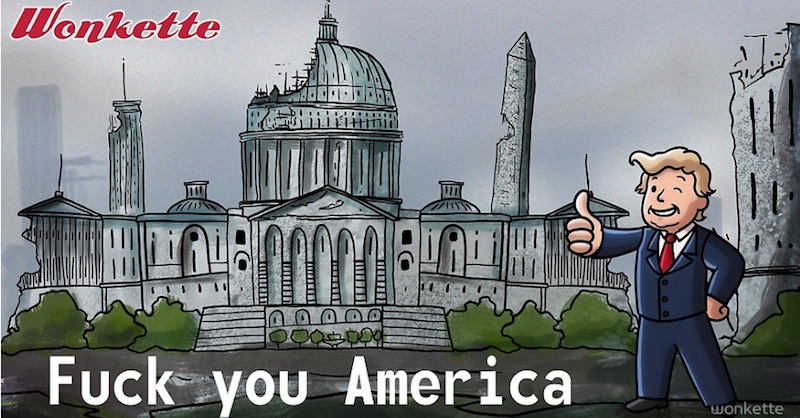 Leftist clowns who gloated that their failed, corrupt, lying candidate would slide into office because they faced a man they thought could never win the White House are beside themselves.

They don’t live in a country that elected a Black American – twice. They now live in a racist, hate-filled, white-supremacist fascist dictatorship that they hate.

The headline from the popular site “Wonkette” says it all “GO F**K YOURSELF AMERICA,” they write, calling Americans “pieces of sh*t.”

Their rage and enmity is palpable. Here is a snippet and warning  – it is filled with vile, racist content:

No. Really. Just go fuck yourself, you racist piggy white power pieces of shit. You wear shirts that laugh about lynching reporters. (That smarts!) You scream “nigger” at men who turn out to be goddamn saints while you’re whitesplaining them the fucking Boondocks. You teach your kids to tell their classmates how great life will be once they’re deported. You beat up homeless people, for Jesus and America too.

And you think it’s fucking adorable.

Did you #rig it? Fuck! Maybe! I’ve always been a little partial to the Alex Jones side of the sanity spectrum, but forgive me if I wonder: I didn’t see Anonymous riding to Hillary Clinton’s rescue, when four years ago they taunted Karl Rove that they’d trapped his little vote rats in the internet tubes. (Yeah, “citation needed,” Anonymous.) And we all know Trump loves to accuse people of every thing he’s doing himself. Besides, you’ll never convince me John Kerry lost Ohio in 2004. Oh, should I not say that in polite wonky company, if I want to keep my cool pundit card? WELL FUCK POLITE WONKY COMPANY, THAT WAS ‘WONKY’ AS SHIT.

Let’s talk about all the things that will be terrible now! BECAUSE PEOPLE ARE EVIL AND EVERYONE SUCKS.

Are you a black person? I’m sorry, everyone hates you, like, personally 🙁

Are you Latina? Chica, lo siento!

Do you like doing things in #butts with your husband, who is a man? The next four justices just deported your adopted baby back to Cambodia, too bad, it was nice while it lasted.

Are you just a regular straight old boring ass white person, and the cops don’t roust you none, but you also like eating food and having shelter? WELL DONALD TRUMP JUST BREXITED YOUR STOCK MARKET, and he’ll do for the country what he did for his casinos.

He lost fucking money on LIQUOR.

And he doesn’t know jack shit about ANYTHING, and say goodbye to that last white-knuckled grasp on the middle class. Oh, you care about “the debt”? He just blew it up by FIVE. TRILLION. DOLLARS. He promised to treat the country’s bondholders like he treated the people who paid off his bankruptcies: by not paying them shit. Hello, Greece! Is life fun there under Nazis?

But sure, “economic anxiety,” you sister-raping neanderthals. Enjoy your brother-in-law’s meth trailer.

Did you like that 4.5 percent unemployment rate? Did you like being able to buy yourself a treat when you went to stock up on toothpaste at Walgreens, and saying to yourself, HEY LOOK, I BOUGHT ME A TREAT? Yeah, fuck a treat, you don’t get your retirement fund, and no mortgage payment, and no job.

Women? Lol, honey, don’t make that face. It’s so ugly on you, that persona. Also: you don’t matter, and you never will.

Media? Oh, yours is coming. Mighta thought about that when you were playing footsie with James Comey.

Oh shit, I almost forgot about Obamacare! Now, if you’re like us, you won’t be able to buy insurance for your family! Instead we’ll get repealed and replaced with “the lines around the states!”

I deny that a woman like Hillary Clinton lost to that monstrous Horror Klown for any reason besides THIS COUNTRY IS HORRIBLE. Fuck your bullshit emails, fuck your bullshit FBI, fuck your bullshit “she ran a bad campaign; she was a dud and he was exciting.” The man is a rambling, boring toddler. If they “loved him,” it wasn’t for his charisma, it was for his flat-out fascism, BECAUSE THEY ARE LIZARD-BRAINED PEOPLE WHO LOVE TORTURING OTHERS.

They get off on it. It fucking gets them off.

Oh man and do they haaaaate us women. Oh man, a bossy old bitch wasn’t going to tell them what to do! And that glass ceiling at the Javits Center. Oh, haw haw haw.

This is where I fake some Pollyanna bullshit to leave you on some uplift, and it’ll make you share this post.

NOPE. THIS POST IS RAZOR BLADES AND HUMAN SHIT AND KILLING EACH OTHER SID & NANCY STYLE.

Come back tomorrow for some pony bullshit, I might be able to fake it for you by then.

Then, “Wonkette” took a moment to try to sell their t-shirts and make a little money:

Now buy my fucking FUCK YOU AMERICA shirt while you still have any fucking money left.

This is the America who think they’re more worthy of running America. They’re entitled to it. They are the kind, reasonable, rational ones.

But this is how they truly are, racially-intolerant, hateful and with nothing but hatred for the American people.