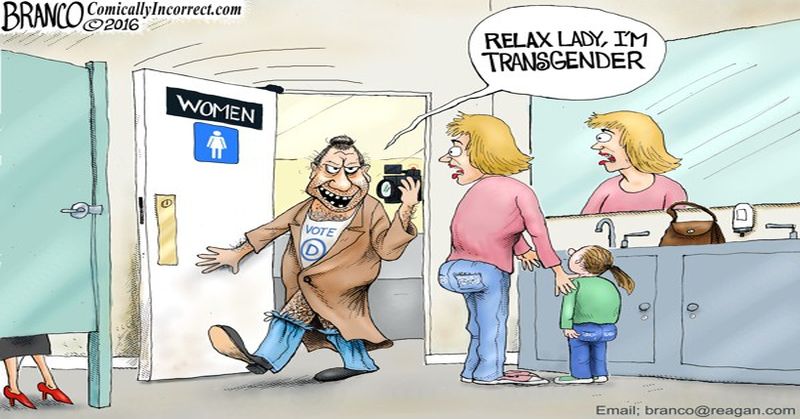 As the nation roils with the so-called “civil rights” debate over transgenderism, a recent The New York Times article gives us a perfect example of the hypocrisy at the heart of the transgender argument.

The The New York Times article in question was one extolling the virtues of pushing transgenderism on high school teens and featured a paragraph that perfectly illustrates the hypocrisy of the liberal argument, not just on this issue, but liberalism–especially that centered on minors–writ large.

The paper related the story of students at Green Mountain Union High School in Chester, Vermont, who were incensed that school administrators had implemented a transgender policy in order to allow a single female student who claims to be a boy to use the boys bathrooms and locker rooms at the school.

The school has broken down into two camps, according to the paper’s article, one side in favor of the so-called transgender student and the other against her right to claim to be a male.

Now, the chief argument that leftists make to legitimize forcing all schools in America to implement pro-transgender policies is that we can’t discriminate against kids who feeeel they should be a different sex than what they were born as simply because they feeeel they are right. We are to take their word for their feeeeeelings because if we don’t we are discriminating against them.

This, they say, is *just like* implementing civil rights for blacks. Because, you see, we can’t penalize kids for being transgender because if we do we are punishing them for *what they are* just like we did when African Americans had their rights quashed. Further, we can’t take away these kids’ “freedom” to decide to be the opposite sex nor can we oppose their right to free speech.

But buried in the Times story was a telling paragraph (my bold):

Like much of the country, this rural school of 300 students in seventh through 12th grade, where everyone insists there were never any cliques, is divided over the bathroom issue, with the teenagers here carrying out a proxy culture war for their parents and the country. Still struggling to form opinions about what makes a civil society, they openly quote what they have heard their parents say about the merits or demerits of transgender bathrooms.

Now, notice what this means. In its story on the Vermont school theTimes

So, let’s think about this. On one hand the leftist kids the Times wants to support are *right* in their opinions that they are *really* the opposite sex, yet the kids who the paper doesn’t like are wrong to oppose the so-called transgender kids.

In the opinion of The New York Times we are supposed to take the transgender kids’ word as golden, we are supposed to accept everything they say as gospel truth and morally correct, yet the kids who say they don’t want transgenderism in their school are idiots who are only being controlled by others and for that reason we should ignore their opinions and ideas.

But where is the empirical logic, here? The base reason for accepting transgender kids at their word is illogical if we are only going to accept the words of the liberal kids we like but not the words of the conservative kids we don’t like. In other words, the Times is not saying kids should be allowed to make their own decisions because by only supporting the leftist kids and not the conservative kids the paper–and by extension the whole of the left that this paper represents–is only supporting the leftist ideal they want to push, not the kids.

We should note that we don’t let kids run their own lives for a reason. They are neither mentally nor physically ready to accept the burden of responsibility. It is why you can’t sign contracts until you are of age and a host of other things.

And more specifically to this absurd transgender issue, it is why the American College of Pediatricians said that forcing kids into transgenderism is akin to child abuse.

Finally, in theTimesarticle, we got another example of how transgenderism is a scam. You just don’t choose to be another sex because you feel like it.

Here is one of the hurdles the Vermont girl pretending to be a boy had to jump in her quest to *be* a boy:

There were practical issues. When he had his period, he wondered if he should revert to the girls’ bathroom, because there was no place to throw away his used tampons. But he had started feeling like an intruder in the girls’ bathroom, and the single bathrooms were so far out of the way it was hard to get to class on time.

There is a singular scientific fact about this point the paper was desperately trying to make. Boys don’t menstruate. So, no New York Times, the Vermont girl pretending t be a boy is not a he quite regardless of what she claims.