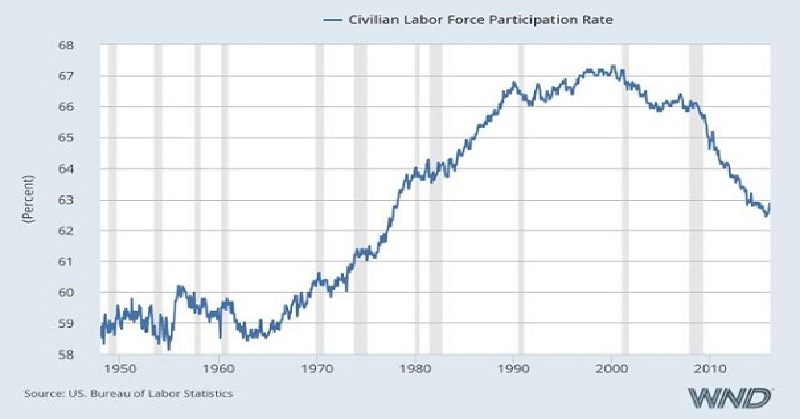 Last year, Obama said with a straight face to Jon Stewart that “the economy, by every metric, is better than when I came into office.”

Politifact rated the statement as “mostly-false,” and it wasn’t very hard to find examples of where the economy has worsened since Obama took office.

Jerome Corsi at World Net Daily has written a piece that updates one that we published here at The Federalist Papers last year, titled TRUTH BOMB: Obama’s Disastrous Economic “Recovery” In 9 Horrifying Charts. 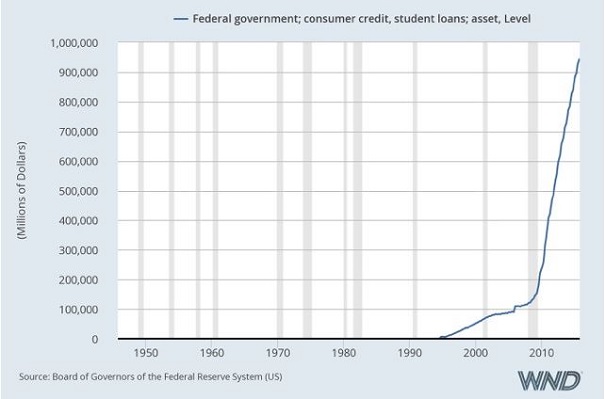 At the beginning of the Obama administration, in the first quarter of 2009, student loans stood at $146.6 billion. From there, the graph rises steeply. By the fourth quarter 2015, the last quarter for which the Federal Reserve Bank of St. Louis charted the data, student loans had risen to $945.6 billion. Under President Obama, the Supplemental Nutrition Assistance Program, or SNAP, commonly known as the “Food Stamps” program, has grown from $54.8 billion in 2009 to $69.4 billion in 2014. The federal debt is projected to nearly double under President Obama, with the Federal Reserve Bank of St. Louis chart showing it has increased from $11.1 trillion in the first quarter 2009 to $18.9 trillion in the fourth quarter 2015. Despite Obama’s promises that the implementation of Obamacare would lower health-care costs, the Federal Reserve Bank of St. Louis chart shows the Consumer Price Index, CPI, for medical care services has continued a straight-line increase since the passage of the Affordable Care Act. In April 2014, nearly 93 million Americans were considered out of the labor force. According to John Williams, an economist known for arguing the government reports manipulate “shadow statistics” of economic data for political purposes, drops in the unemployment rate as reported by the BLS have become virtually meaningless.

“The broad economic outlook has not changed, despite the heavily-distorted numbers that continue to be published by the BLS,” Williams writes in his subscription newsletter on ShadowStats.com. “The unemployment rates have not dropped from peak levels due to a surge in hiring; instead, they generally have dropped because of discouraged workers being eliminated from headline labor-force accounting.” The Bureau of Labor statistics measures labor’s share of the income produced by nonfarm employment, roughly described as employment in the business sector of the economy. The measure is often used to interpret “the worker’s share of the economy,” with a declining index interpreted as a measure of growing economic discontent among middle class employees. How’s that for hope and change?