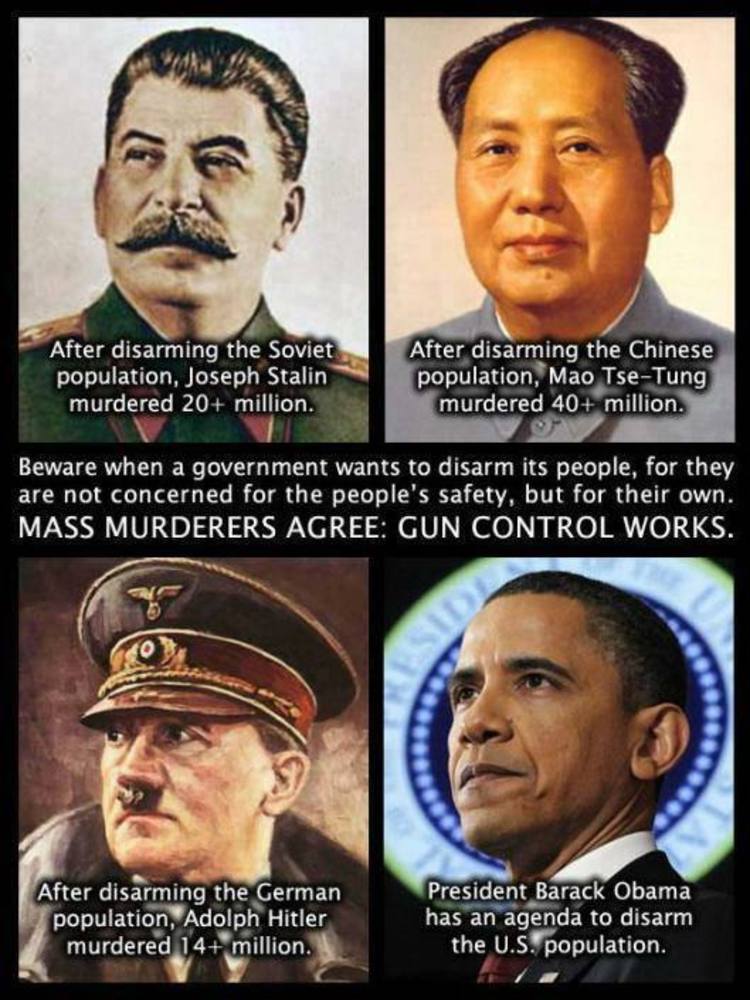 What we see is that some of today’s politicians are magnifying the crimes they are placed in office to prevent.

They allow crime to be promoted through entertainment and when the crime is committed, they are there in hopes to grab the guns away.

This is exactly how criminals in government operate. They demonize the gun, not the criminal.

Friends, this mentality is like blaming spoons for people being overweight, as if to say the act is apart from the actor.

Since criminal politicians refuse to look at history, which can be at the present our greatest teacher, it is very clear that gun banners know exactly what they are attempting to do -– put the Second Amendment in the crosshairs.

Time and time again it has been a corrupt government who is responsible for the mass murder of their own people under the deceptive guise of “gun control,” all of which the said dictators implemented.

Keep in mind these people promised their citizens protection and freedom upon the forfeiture of their guns.

How many times, I ask, does history need to repeat itself?

“The most foolish mistake we could possibly make would be to allow the subject races to possess arms. History shows that all conquerors who have allowed their subject races to carry arms have prepared their own downfall by so doing. Indeed, I would go so far as to say that the supply of arms to the underdogs is a sine qua non for the overthrow of any sovereignty. So let’s not have any native militia or native police. German troops alone will bear the sole responsibility for the maintenance of law and order throughout the occupied Russian territories, and a system of military strong-points must be evolved to cover the entire occupied country.”

Germany established gun control in 1938 and from 1939 to 1945, 13 million Jews and others who were unable to defend themselves were rounded up and exterminated.

“If the opposition disarms, well and good. If it refuses to disarm, we shall disarm it ourselves.”

In 1929, the Soviet Union established gun control. From 1929 to 1953, about 20 million dissidents, unable to defend themselves, were rounded up and exterminated.

“War can only be abolished through war, and in order to get rid of the gun it is necessary to take up the gun.”

China established gun control in 1935. From 1948 to 1952, 20 million political dissidents, unable to defend themselves, were rounded up and exterminated.

“I do not want to be controlled by any superpower. I myself consider myself the most powerful figure in the world, and that is why I do not let any superpower control me.”

Pol Pot, who created in Cambodia one of the 20th century’s most brutal and radical regimes, was responsible for killing one million of his own ‘educated,’ yet unarmed citizens.