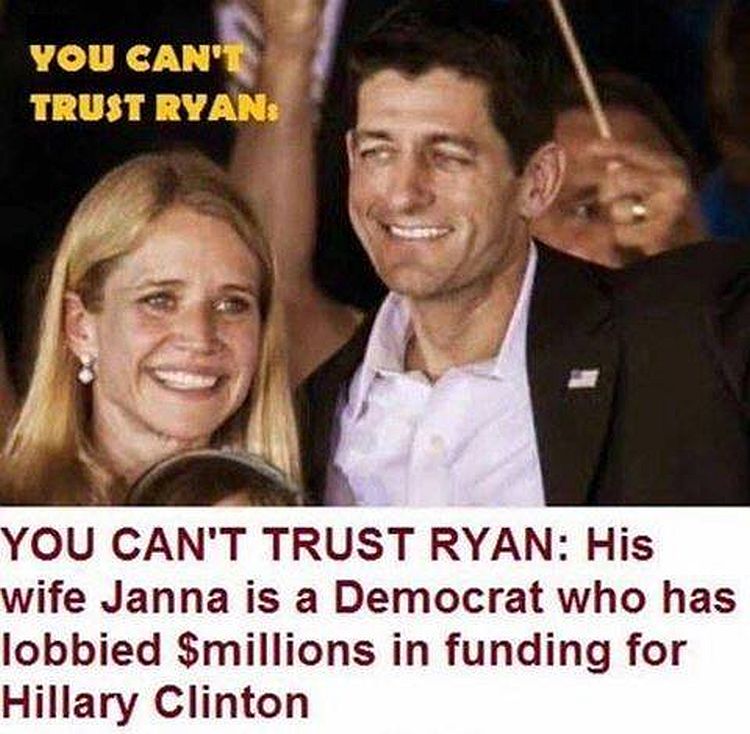 As it turns out, Paul Ryan has some rather close connections to the Democratic Party. This kind of connection is not something that bodes well for the current Speaker of the House.

The marriage between a man and a woman is a mutual political-spiritual co-joining of forces and ideologies including love. The man will support and encourage his wife and the wife her husband.

So if you are scratching your head and rubbing your rabbit foot in an expression of confusion and lack of understanding of Speaker of the House Paul Ryan and his blatant liberal agenda and decision making processes all you have to do is look into his family unit. Then you will learn that he supporting his wife’s ideology. As a man should and probably to remain in good graces in a supportive marriage.

Janna herself has lobbied for liberal movements, such as marching in Washington in college for women’s rights, The New York Times reported. Janna rarely gives interviews, CNN reported, and doesn’t speak publicly about her political views.

Speaker Paul Ryan will not operate his family unit and make decisions that will cause friction and go against the will of his wife.

This is how most marriages operate unless your wife is a Florida Gator fan and you are a FSU fan, then that would be another battle to work through. But the woman will always win. Even if you are right.

So if you want to understand why Speaker Ryan funded Obamacare and Planned Parent Hood, I suggest you ask his wife. She is wearing the pants in the family metaphorically speaking. In my humble opinion.

If you want to know why Paul Ryan is using taxpayer money to fund 100,000 un-vetted Syrians for a free taxpayer funded ride in cities across the United States ask his wife…. the bleeding heart liberal that she is. She is pro-open borders.

Paul Ryan’s decisions and thought processes are a reflection of his spouse’s mindset. Mrs. Ryan is a life long Democrat who is pushing Obama’s agenda through her husband. And of course a happy life is a happy wife.

Paul Ryan also had a penchant for dating Democrats which allows him to embrace his real honest true to heart Democrat values. Seriously, many years ago I went out on a blind date with a lady who turned out to be a Democrat and when she opened her mouth I responded back in kind and that ended that date.

It lasted 2-3 minutes. I also left her the bill for the drinks tab to help her redistribute her wealth. I cannot tolerate being around a liberal mindset. I am a conservative with different values. Paul Ryan is not a conservative my friends… if he was he would never have married Jenna Little.

Paul Ryan’s ex-flame and last love of his life before getting married to Janna Little was his ex-girl friend and black American Democrat Daneeta Pope. She too voted for Obama twice and also supports his Communist Agenda.

Deneeta Pope hit headlines after MailOnline revealed that she was the Republican vice-presidential candidate’s ex-girlfriend who opened his eyes to the evils of racism.

She served five months in prison after defrauding her employer Ernst & Young out of $77,000 in 1999, according to the federal Bureau of Prisons.

Ms Pope admitted claiming funds from work to attend an educational course which did not exist.

Mr Ryan has stayed in touch with his ex over the two decades since they broke up – he even attended Ms Pope’s wedding in May this year.

Paul Ryan just can’t seem to stay away from females who are Democrats. Apparently Paul Ryan can fake being a Republican to muster through a Liberal agenda to please not only his liberal left wing Obama supporting wife; but also his former girl friends in the Democrat Party.

Paul Ryan is a massive threat to the U.S. Constitution and the national security of this nation, not only militarily. Our nation, our children and our future as a nation depend upon it. Speaker Paul Ryan is a Charlie Crist Republican, who is perhaps being manipulated by a Liberal wife.

And just as my former Executive Officer told me while I was forward deployed in the Eastern Mediterranean Sea with a Navy SEAL Unit in Operation Desert Storm:

Ross, never forget shipmate, the biggest threat to our national security is a dependent wife running her mouth at the grocery store bitching about something after getting a letter from a deployed husband. That’s why nobody is gonna be sending any letters home until we take out Saddam.

The same is true in politics….. lose lips sink ships.

Politics makes for strange bedfellows, in this case it is Janna and Paul Ryan.