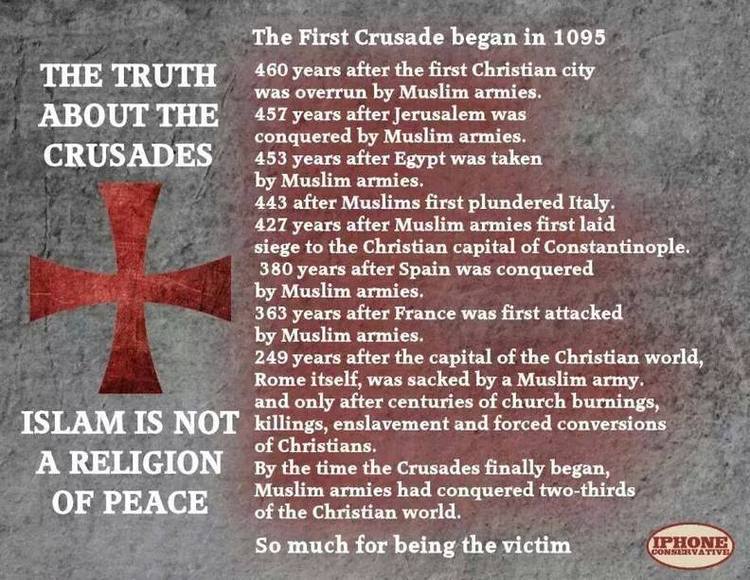 Mention Islamic Jihad to any atheist and/or liberal and you will probably get the retort back about the Crusades and how many people were killed in the name of the Christian religion.

The problem with the comparison is that most people are totally ignorant about history; especially about the history of Islam’s conquest of much of the Christian world in its first couple of centuries.

Let’s start first with Crusade myths that need to be exploded.  Ignatius Insight enlightens us as to the truth:

Myth 1: The Crusades were wars of unprovoked aggression against a peaceful Muslim world.

This is as wrong as wrong can be. From the time of Mohammed, Muslims had sought to conquer the Christian world. They did a pretty good job of it, too. After a few centuries of steady conquests, Muslim armies had taken all of North Africa, the Middle East, Asia Minor, and most of Spain.

In other words, by the end of the eleventh century the forces of Islam had captured two-thirds of the Christian world. Palestine, the home of Jesus Christ; Egypt, the birthplace of Christian monasticism; Asia Minor, where St. Paul planted the seeds of the first Christian communities: These were not the periphery of Christianity but its very core. And the Muslim empires were not finished yet.
/>

They continued to press westward toward Constantinople, ultimately passing it and entering Europe itself. As far as unprovoked aggression goes, it was all on the Muslim side.

At some point what was left of the Christian world would have to defend itself or simply succumb to Islamic conquest. The First Crusade was called by Pope Urban II in 1095 in response to an urgent plea for help from the Byzantine emperor in Constantinople.

Urban called the knights of Christendom to come to the aid of their eastern brethren. It was to be an errand of mercy, liberating the Christians of the East from their Muslim conquerors. In other words, the Crusades were from the beginning a defensive war. The entire history of the eastern Crusades is one of response to Muslim aggression.

Myth 2: The Crusaders wore crosses, but they were really only interested in capturing booty and land. Their pious platitudes were just a cover for rapacious greed.

Historians used to believe that a rise in Europe’s population led to a crisis of too many noble “second sons,” those who were trained in chivalric warfare but who had no feudal lands to inherit. The Crusades, therefore, were seen as a safety valve, sending these belligerent men far from Europe where they could carve out lands for themselves at someone else’s expense. Modern scholarship, assisted by the advent of computer databases, has exploded this myth. We now know that it was the “first sons” of Europe that answered the pope’s call in 1095, as well as in subsequent Crusades. Crusading was an enormously expensive operation. Lords were forced to sell off or mortgage their lands to gather the necessary funds. They were also not interested in an overseas kingdom. Much like a soldier today, the medieval Crusader was proud to do his duty but longed to return home. After the spectacular successes of the First Crusade, with Jerusalem and much of Palestine in Crusader hands, virtually all of the Crusaders went home. Only a tiny handful remained behind to consolidate and govern the newly won territories. Booty was also scarce. In fact, although Crusaders no doubt dreamed of vast wealth in opulent Eastern cities, virtually none of them ever even recouped their expenses. But money and land were not the reasons that they went on Crusade in the first place. They went to atone for their sins and to win salvation by doing good works in a faraway land.

Myth 3: When the Crusaders captured Jerusalem in 1099 they massacred every man, woman, and child in the city until the streets ran ankle deep with the blood.

This is a favorite used to demonstrate the evil nature of the Crusades.

It is certainly true that many people in Jerusalem were killed after the Crusaders captured the city. But this must be understood in historical context. The accepted moral standard in all pre-modern European and Asian civilizations was that a city that resisted capture and was taken by force belonged to the victorious forces. That included not just the buildings and goods, but the people as well. That is why every city or fortress had to weigh carefully whether it could hold out against besiegers. If not, it was wise to negotiate terms of surrender. In the case of Jerusalem, the defenders had resisted right up to the end. They calculated that the formidable walls of the city would keep the Crusaders at bay until a relief force in Egypt could arrive. They were wrong. When the city fell, therefore, it was put to the sack. Many were killed, yet many others were ransomed or allowed to go free.

Myth 4: The Crusades were just medieval colonialism dressed up in religious finery.

It is important to remember that in the Middle Ages the West was not a powerful, dominant culture venturing into a primitive or backward region. It was the Muslim East that was powerful, wealthy, and opulent. Europe was the third world. The Crusader States, founded in the wake of the First Crusade, were not new plantations of Catholics in a Muslim world akin to the British colonization of America. Catholic presence in the Crusader States was always tiny, easily less than ten percent of the population. These were the rulers and magistrates, as well as Italian merchants and members of the military orders. The overwhelming majority of the population in the Crusader States was Muslim. They were not colonies, therefore, in the sense of plantations or even factories, as in the case of India. They were outposts. The ultimate purpose of the Crusader States was to defend the Holy Places in Palestine, especially Jerusalem, and to provide a safe environment for Christian pilgrims to visit those places. There was no mother country with which the Crusader States had an economic relationship, nor did Europeans economically benefit from them. Quite the contrary, the expense of Crusades to maintain the Latin East was a serious drain on European resources. As an outpost, the Crusader States kept a military focus. While the Muslims warred against each other the Crusader States were safe, but once united the Muslims were able to dismantle the strongholds, capture the cities, and in 1291 expel the Christians completely.

Myth 5: The Crusades were also waged against the Jews.

No pope ever called a Crusade against Jews. During the First Crusade a large band of riffraff, not associated with the main army, descended on the towns of the Rhineland and decided to rob and kill the Jews they found there. In part this was pure greed. In part it also stemmed from the incorrect belief that the Jews, as the crucifiers of Christ, were legitimate targets of the war. Pope Urban II and subsequent popes strongly condemned these attacks on Jews. Local bishops and other clergy and laity attempted to defend the Jews, although with limited success. Similarly, during the opening phase of the Second Crusade a group of renegades killed many Jews in Germany before St. Bernard was able to catch up to them and put a stop to it. These misfires of the movement were an unfortunate byproduct of Crusade enthusiasm. But they were not the purpose of the Crusades. To use a modern analogy, during the Second World War some American soldiers committed crimes while overseas. They were arrested and punished for those crimes. But the purpose of the Second World War was not to commit crimes.

These are just a few of the commonly taught myths about the Crusades.

The following video map gives a much better perspective on the differences between Islamic Jihad and the Christian Crusades:

So, despite what the national media, President Obama, CAIR, and American pseudo-academics may assert, there really is not a rational comparison between Islamic Jihad and the Christian Crusades.
/>

Christians in the eleventh century were not paranoid fanatics. Muslims really were gunning for them. While Muslims can be peaceful, Islam was born in war and grew the same way. From the time of Mohammed, the means of Muslim expansion was always the sword. Muslim thought divides the world into two spheres, the Abode of Islam and the Abode of War. Christianity — and for that matter any other non-Muslim religion — has no abode. Christians and Jews can be tolerated within a Muslim state under Muslim rule. But, in traditional Islam, Christian and Jewish states must be destroyed and their lands conquered.