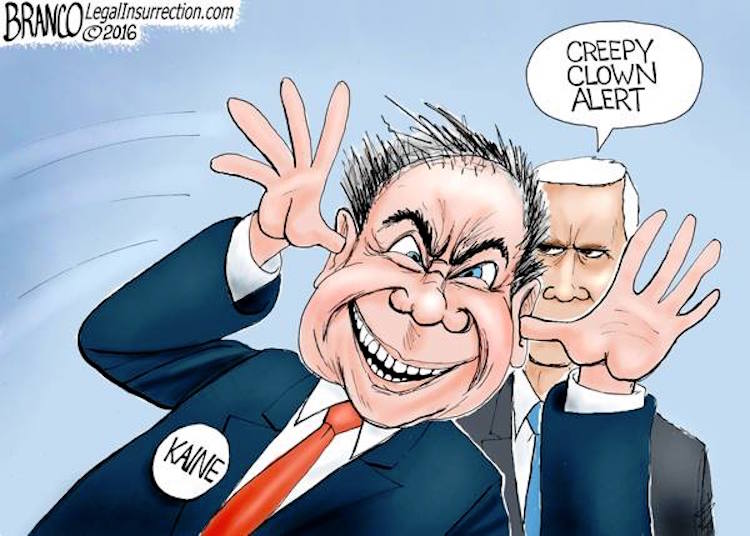 The Washington Free Beacon reported that at a Kaine rally in Dayton, Ohio on Monday, Democrat senate candidate Ted Strickland said that the vice presidential candidate is “ready to become president” if need be.

Tim Kaine "ready to become the president" if that ever became necessary, ex-Ohio Gov Ted Strickland says in intro at Dayton Stivers High

The problem, as we’ve reported extensively here at TFPP, is that Kaine is anything but “fit” to be president, or vice president. Here are some of the top reasons:

Kaine is an avowed race-baiter:

“I struck three white [prospective jurors], not because they were unsympathetic individuals, but purely to increase the odds that the jury would have at least one black representative,” Kaine wrote in the article, titled “Race, Trial Strategy, and Legal Ethics.”

“Most trial strategy involves ‘playing averages’ in situations where information is incomplete and consequences uncertain,” Kaine said. Making guesses based on racial stereotypes, he suggested, was just another way of playing averages.

As Robert Gehl pointed out in his post here at TFPP, “Some observers point out that if it was a legal practice, Kaine would have been obligated to use it.” That said, Gehl went on to add that “Still, as Hillary’s VP choice, Kaine has often played the race card, even telling a crowd of black college students that Donald Trump’s values are the same as “Ku Klux Klan values.”

Kaine has a history of embracing radical Islam:

“He appointed a Hamas supporter to a state immigration commission, once spoke at a dinner honoring a Muslim Brotherhood terrorist suspect and has received many donations from well-known Islamist groups.

Back in 2007, Breitbart reports, then-Governor Kaine chose Muslim American Society (MAS) President Esam Omeish to the state’s Immigration Commission. It was an appointment so controversial that even a Muslim group against radical Islam criticized the appointment and lack of vetting.

In 2008, federal court filings found that MAS was ‘founded as the overt arm of the Muslim Brotherhood in America.'”

Kaine exposed his racism when he asserted that white people need to be the minority; as TFPP covered (via Polizette):

“‘I’ve never been treated badly in life because of my skin color or my gender. If I’ve been treated bad in life it’s because the other person was a jerk or I deserved it,’ said Kaine, drawing enthusiastic cheers from the crowd. ‘I think the burden is on those of us who are in the majority–Caucasians. We have to put ourselves in a place where we are the minority.'”

As we’ve also reported here at TFPP (via Conservative Tribune), Kaine doesn’t even believe that his own running mate should be president. Kaine said during a campaign speech in Erie, PA (bold for emphasis is mine):

“You want to know if we’ll disclose our finances, so you can understand how we’ve managed our own household or business and see if we owe anybody anything.

We want to make sure that candidates aren’t involved in any foreign entanglements that could impact our national security, and we want to know that they’re in good-enough health to perform their duties.