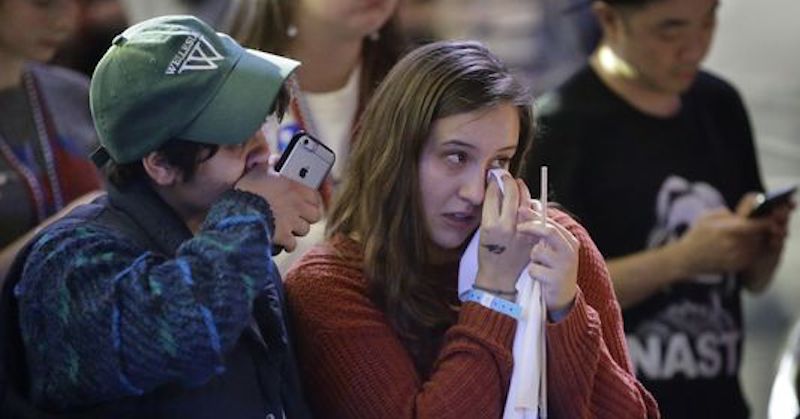 College campuses around the country are doing their level best to protect their delicate scholars from the outcome of the presidential election.

The delicate, crystalline students they’re churning out have become so brainwashed into the intolerance of the left, that a simple presidential election has turned them into whimpering, quivering bowls of spineless Jell-O.

At the University of Michigan’s Law School, they announced a “post-election self care” event, complete with “food” and “play”… including (and I am not kidding you) Play-Doh, card making, Legos and bubbles. (The event was such an embarrassment for the school, they scrubbed it from their calendar and cancelled the event.)

At Cornell University, they held a “Cry-In” over the Trump victory on the school’s quad.

“I’m quite terrified, honestly,” one student told the campus newspaper as she took part in the event, according to The College Fix. “It’s saying that people are really given into fear-mongering. They are willing to put people down based on their identity just so that they would feel vindicated that they would be getting rid of ‘Crooked Hillary.’”

At Stanford University, they emailed students that psychological counseling was available for anyone experiencing “uncertainty, anger, anxiety and/or fear” after the election.

The University of Michigan did the same thing.

At the University of Pennsylvania (Trump’s alma mater, by the way), they offered “safe spaces” with puppies and coloring books.

The event at the Ivy League institution was hosted by the faculty director of Fisher Hassenfeld College House, The Fix reports.

“There were actual cats and a puppy there,” Penn student Daniel Tancredi told The College Fix via email. “There were sheets of paper available with black and white printed designs on them for students to color in. Essentially they looked like pages from a coloring book that were printed from a computer. They all had positive feel-good messages on them. Students colored them in with colored pencils.”

Yale had a “group scream.”

At Tufts, arts and crafts were offered. The University of Kansas said they had “therapy dogs” available to traumatized students.

In an email to students, University of Michigan President Mark Schlissel wrote: “Our responsibility is to remain committed to education, discovery and intellectual honesty — and to diversity, equity and inclusion. We are at our best when we come together to engage respectfully across our ideological differences; to support all who feel marginalized, threatened or unwelcome; and to pursue knowledge and understanding.”

These are the leaders of the future, folks. These are the people who will inherit the levers of power in our country.