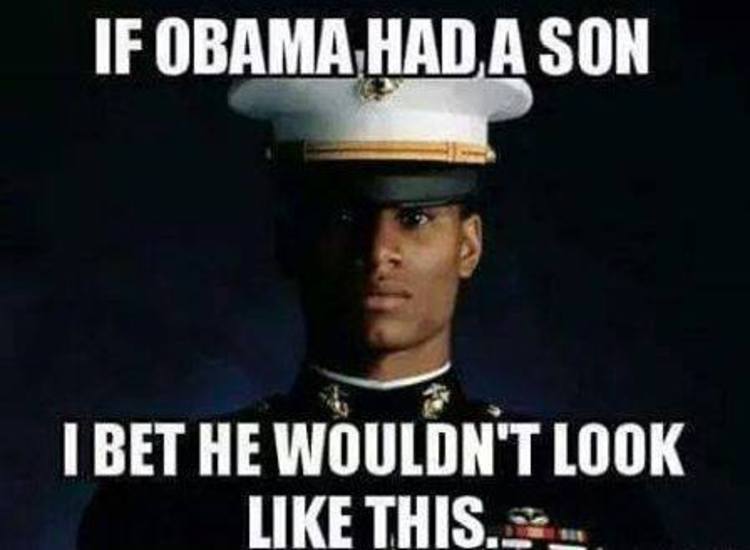 The Examiner reports Obama’s top 30 most disrespectful insults to the military:

30) Looking past all his civilian aides to order a Marine to hold an umbrella over his head like a butler for an entire speech at the Rose Garden, in violation of military regulations.
29) Forcing race-baiting class warfare propaganda, extreme PC “sensitivity” measures, and Gay Pride Month on soldiers.
28) Taking credit for the success of the surge he opposed in Iraq.
27) Taking credit for the success of the interrogation policies he opposed that located Osama bin Laden.
26) Skipping the funeral of the highest-ranking officer to be killed on foreign soil in over 40 years (Major-General Harold J. Greene), to play golf.
25) Smearing veterans as potential domestic terrorists.
24) Trying to make wounded veterans cover their own medical treatment through private health insurance plans, which would inevitably end up increasing their out-of-pocket costs.
23) Blaming our troops for the Taliban attacking them…for everything from objecting to pedophilia and advocating women’s rights, to not wearing latex gloves while handling Korans and walking in front of Muslims while they are praying.
22) Rushing in to misrepresent the Ft. Hood massacre that killed 13 soldiers (one whom was pregnant) as mere “workplace violence.”
21) Giving captured terrorists at Gitmo (who are drenched in soldiers’ blood) a $750,000 soccer field, cable TV, entertainment, classes in painting, etc., while stripping away benefits for soldiers at every turn.

20) Ordering federal agencies to make the sequester cuts as painful as possible for the American people, which ended up cutting tuition assistance for soldiers and increasing other college costs for the Armed Forces across the board.
19) Denying veterans from all over the country access to the WWII Memorial in Washington over a staged government shutdown while allowing illegal immigrants to hold a political rally on closed federal grounds.
18) Cutting military health care benefits and pensions while increasing spending on unionized federal bureaucrats (Democrat voters).
17) Ignoring a former Marine frivolously imprisoned in Mexico on trumped up weapons charges.
16) Using soldiers to help a terror-sponsoring dictator fight off outraged civilian protesters.
15) Purging the military of oath-keeping constitutionalists.
14) Imposing draconian cuts to the things we are actually supposed to be spending tax dollars on under the Constitution (like the military), while exploding spending on things the Federal Government has no authority to even be involved in, as with the left’s trillion-dollar health care takeover.
13) Silencing and criminalizing Christianity in the military.
12) Banning time-proven interrogation techniques and insisting on treating foreign terrorists as mere common criminals to be tried in American courts, as civilians.
11) Suppressing military votes.

10) Imposing ludicrous rules of engagement on our troops that have needlessly gotten many soldiers killed.
9) Appeasing our enemies, backing down after drawing “red lines” in the sand, betraying our allies, and dismantling our missile defenses…all of which needlessly endangers our troops.
8) Cutting troops down to pre-WWII levels, and then allowing illegal immigrants into the military.
7) Allowing veterans to die on secret waiting lists at VA hospitals all over the country, after being warned about the manipulated numbers and obscene delays in care (welcome to ‘universal health care’) back in 2008.
6) Abandoning three decorated veterans and a U.S. ambassador to be dragged through the streets and tortured to death by bloodthirsty Islamic savages in Benghazi, and then falsely blaming it on Americans having the right to disagree with Islam in public.
5) Releasing numerous terrorists back onto the streets so they could return and attack our soldiers, including one who ended up becoming the leader of ISIS.
4) Releasing five major terrorist leaders to appease the Taliban into releasing one America-hating deserter.
3) Snatching defeat from the jaws of victory in Iraq while handing Afghanistan back to the Islamic fundamentalists who facilitated 9/11 (the Taliban).
2) Openly funding and arming Islamic terrorists.
1) Endlessly trampling the Constitution that soldiers are sworn to defend and attacking the rights they fight, bleed, and die to protect.