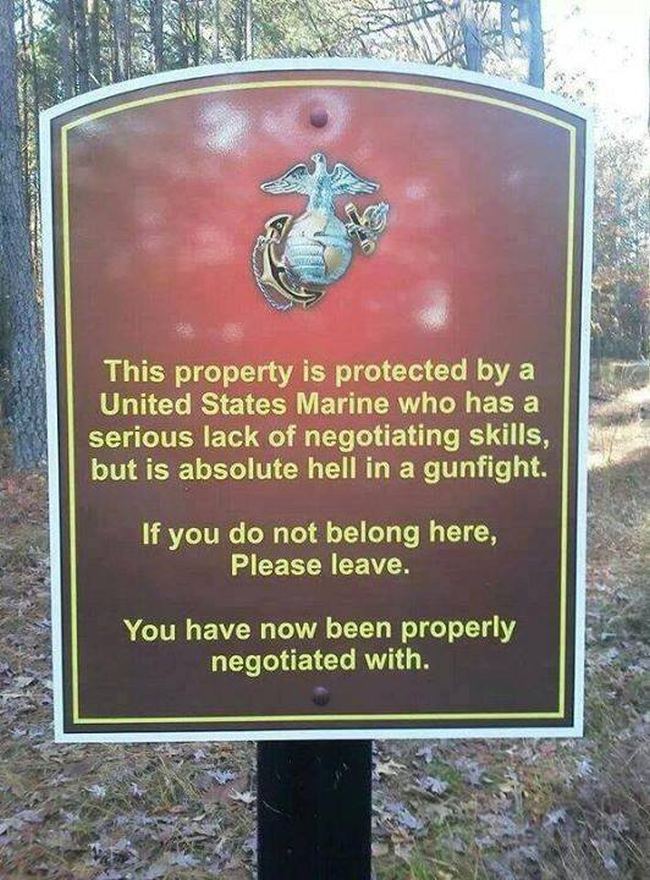 This Marine has one of my all time favorite yard signs. I bet it’s pretty effective at scaring away would be troublemakers. What do you think?

The purpose of the police is to keep civilians safe and protected, correct?

Who would know better how to protect and secure individuals’ rights than those who sacrifice their lives each and every day? Who put their lives on the line to protect the innocent?

Law enforcement officers: those same individuals carry firearms and are cognizant of the real danger men and women face on a regular basis.

Those same honored, revered, and respected police officers are coming out against proposed gun control legislation in California.

As reported by Guns.com:

The California Police Chiefs Association has joined other groups in opposition to Lt. Gov. Gavin Newsom’s Prop. 63 “Safety for All” voter initiative.

Newsom, who is currently running to replace Gov. Jerry Brown in office, will place an expansive five-point list of gun control measures in front of voters in the coming general election…

Besides the fact that this proposed legislation ends “grandfathering of magazines capable of holding more than 10 rounds, requires the relinquishment of weapons by those prohibited by the state from legal possession and mandatory reporting of lost or stolen guns… it would require background checks prior to all ammunition sales”, police officers and police departments would not be able to purchase “ammunition freely for on-duty purposes.”

If this law passes, previous legislation would “seize constitutionally protected private property, extort unnecessary fees from those who seek to buy ammo, and criminalize millions of law-abiding Californians.”

This law does not keep guns from dangerous criminals. This law criminalizes innocent, law-abiding Americans who are attempting to protect themselves from dangerous people.

Are Democratic candidates so blind for the vote that they will attempt to pass any legislation to appease liberals?

Even at the cost of the safety of Americans?

With the latest deadly shooting in Houston, legislation should move towards making it easier to protect our families.

Instead, plans like these put a target on our backs.