The Resistance was recently parked out in front of Trump Tower in Manhattan, New York, and several of the demonstrators were arrested because of their rabble-rousing; that includes three Democratic lawmakers, two of them members of Congress.

The speaker of the New York City Council was arrested at the scene, along with two Democratic congressmen. New York Daily News reporter Erin Durkin was at the demonstration.

.@MMViverito, @RepEspaillat and others sitting down in street outside Trump tower

She snapped a picture of the speaker being taken into custody:

She also reported that two of the three Congressmen there were arrested as well, Reps. Raul Grijalva and Luis Guittierrez.

Reps. Raul Grijalva and Luis Guittierrez have also been arrested.

Reps. Adriano Espaillat (D-Manhattan), Raul Grijalva (D-Ariz.), Luis Gutierrez (D-Ill.) and Mark-Viverito were among about ten people who sat down in the street on Fifth Ave. near the tower, and got cuffed after refusing to move.

“We are here to defend our immigrant communities,” Mark-Viverito said before the arrest, where she was put in plastic handcuffs and loaded into a Department of Correction bus with other protesters. 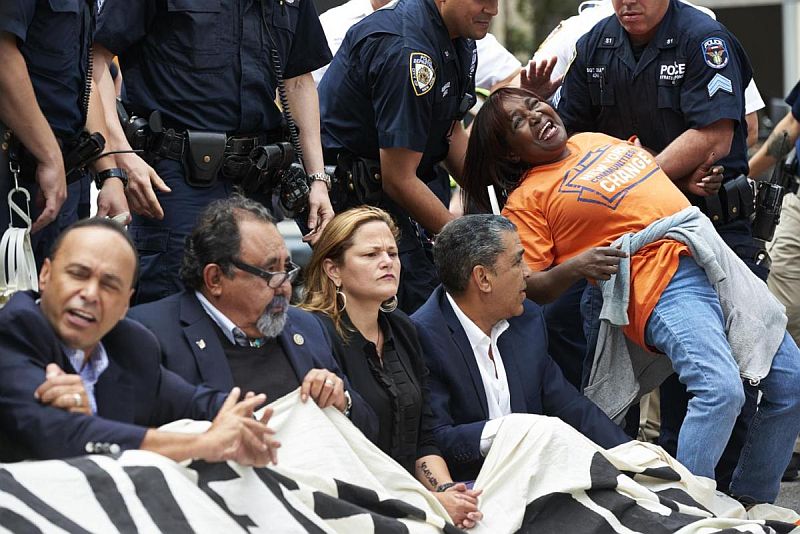 The demonstrators were blocking a roadway, and NYPD demanded they free up the street.

“Since you have refused to leave the roadway, you will be placed under arrest on the charge of disorderly conduct,” NYPD said via a loudspeaker announcement before the group was arrested.

The entourage of demonstrators were protesting the President’s decision to rescind his predecessor’s DACA executive order, which protected some 800,000 illegal aliens from deportation because they arrived here as children and not because of any choice they made.

“They deserve to stay in America. They are workers, students, soldiers in our armed forces,” Adriano Espaillat (D-Manhattan) said.

What these rabid Anti-Trumpers can’t wrap their minds around is the fact that Donald Trump does not want to round up the 800,000 currently under DACA and deport them. He actually wants them to stay, but simply decided that it must be dealt with my Congress and not by the Executive Branch (the right choice, Constitutionally speaking).

Nonetheless, the rabid resistance just cannot allow sense and level-headed judgment to guide their actions. It must be filled with rage and violence, and a false front of “righteous” indignation.