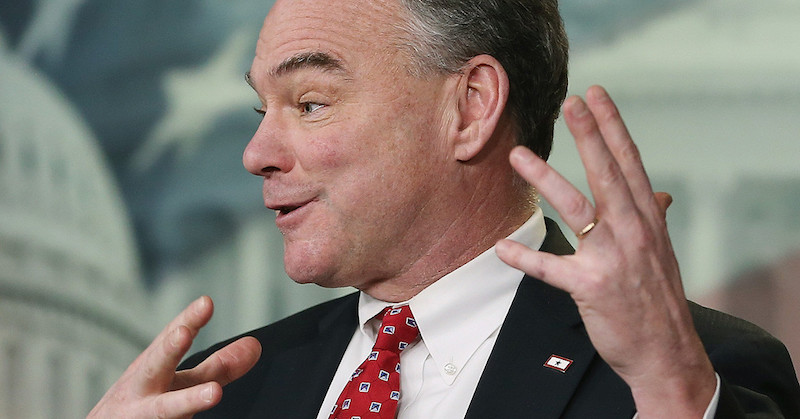 We all know that Democrats have some pretty nefarious political connections … but for Heaven’s sake, why did Hillary have to pick someone with such deep Islamist connections as Tim Kaine?

The Virginia senator has a long history of embracing radical Islam.

He appointed a Hamas supporter to a state immigration commission, once spoke at a dinner honoring a Muslim Brotherhoodterrorist suspect

and has received many donations from well-known Islamist groups.

Back in 2007, Breitbart reports, then-Governor Kaine chose Muslim American Society (MAS) President Esam Omeish to the state’s Immigration Commission. It was an appointment so controversial that even a Muslim group against radical Islam criticized the appointment and lack of vetting.

In 2008, federal court filings found that MAS was “founded as the overt arm of the Muslim Brotherhood in America.”

According to Omeish’s website, he was also President of the National Muslim Students Association and served for two years on the national board of the Islamic Society of North America (ISNA), which the Justice Department also labeled as a U.S. Muslim Brotherhood entity and unindicted co-conspirator in a Hamas-financing trial.

His website says he was Vice President of Dar al-Hijrah Islamic Center, a radical mosque known for its history of terror ties including having future Al-Qaeda operative Anwar Al-Awlaki as its imam and being frequented by two of the 9/11 hijackers and the perpetrator of the Fort Hood shooting. Omeish’s website says he remains a board member.

Omeish directly expressed extremism before Kaine appointed him. He claimed the Brotherhood is “moderate” and admitted that he and MAS are influenced by the Islamist movement. In 2004, Omeish praised the Hamas spiritual leader as “our beloved Sheikh Ahmed Yassin.” Videotape from 2000 also surfaced where Omeish pledged to help Palestinians who understand “the jihad way is the way to liberate your land” (he denied this was an endorsement of violence).

In the second example of Kaine’s deep connections with Radical Islam, he spoke at a 2011 dinner honoring Jamal Barzinji, the “Founding father of the U.S. Muslim Brotherhood.”

Barzinji has been on the FBI’s radar since 1987, when an informant told them that Barzinji was part of a network of brotherhood fronts to “institute the Islamic Revolution in the United States.”

Barzinji played a major role in nearly every Brotherhood front in the U.S. and was vice president of the International Institute of Islamic Thought, which came under terrorism investigation also. Barzinji’s group was so close to Palestinian Islamic Jihad operative Sami Al-Arian that IIIT’s President considered his group and Al-Arian’s to be essentially one entity.

– the “voice for Arab Americans in Virginia” – has very strong ties to the Democratic Party in Virginia, with the Virginia Public Access Project tallying almost $257,000 in donations. This likely explains why Barzinji’s grandson served in Governor McAuliffe’s administration and then became the Obama Administration’s liaison to the Muslim-American community.

Breitbart sums up Kaine’s interesting relationship with the Islamic community:

Kaine has no excuse. If he has an Internet connection, then he and his staff should have known about their backgrounds. They were either extremely careless (something Kaine would have in common with the top of the ticket) or knew and looked the other way in the hopes of earning donations and votes.

Clinton’s choice of Kaine is widely seen as a way of strengthening her campaign’s national security credentials.

How can you trust a candidate on national security who appoints a Hamas supporter to their immigration commission and speaks at a dinner honoring a Muslim Brotherhood terror suspect?

And how can you trust a candidate who picks such a person as their “strong on national security” running mate?