It’s a wonder what 20 years can do to the mind… And if you’re a mainstream media source, that may encompass severe memory loss.

In 1991 the Soviet Union fell and couldn’t get up. The Communist empire was dismantled and a new Russian Federation took its place. With the establishment of an effectively new nation, new leaders were elected in the years to follow (they were all still Communists in reality, though).

Yeltsin had horrendous approval ratings, down into the single digits. So he sought out help from some American advisers to help him with the election.

And somehow, he won.

Time Magazine was all over this election interference and collusion story back in 1996, the Daily Wire points out.

As was written in Time Magazine all those years ago, the article was titled “Yanks To The Rescue — The Secret Story Of How American Advisers Helped Yeltsin Win.” This is the story of how the United States government, with the knowledge of President Clinton, colluded with Russia to put their candidate into the Presidency: 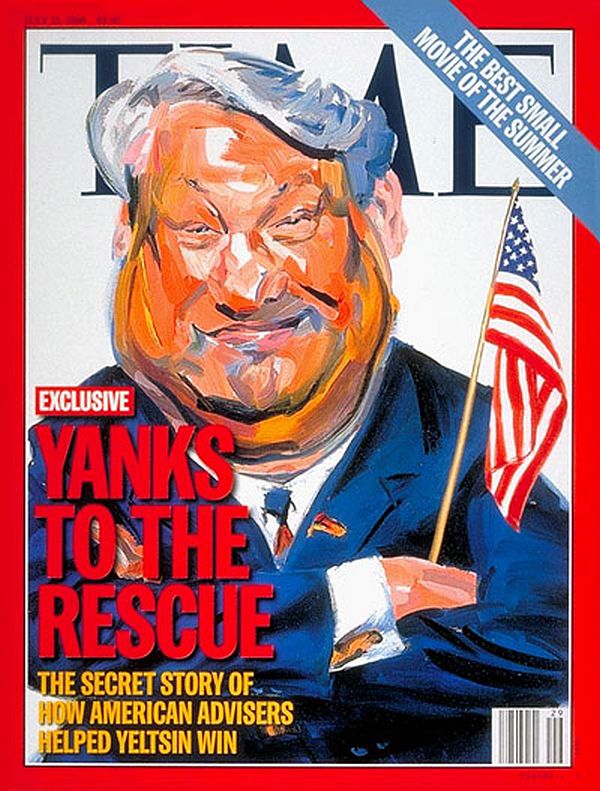 Most of Yeltsin’s confidants believed the President would be magically re-elected despite the Duma catastrophe, but Braynin thought otherwise. The President, he reasoned, could lose without the same kind of professional assistance U.S. office seekers employ as a matter of course. Braynin began a series of confidential discussions with Yeltsin’s aides, including one with First Deputy Prime Minister Oleg Soskovets, who at the time was in charge of the President’s nascent re-election effort. Finally, in early February, Braynin was instructed to “find some Americans” but to proceed discreetly. “Secrecy was paramount,” says Braynin. “Everyone realized that if the Communists knew about this before the election, they would attack Yeltsin as an American tool. We badly needed the team, but having them was a big risk.”

To “find some Americans,” Braynin worked through Fred Lowell, a San Francisco lawyer with close ties to California’s Republican Party. On Feb. 14, Lowell called Joe Shumate, a G.O.P. expert in political data analysis who had served as deputy chief of staff to California Governor Pete Wilson. Since Wilson’s drive for the 1996 Republican presidential nomination had ended almost before it began, Lowell thought Shumate and George Gorton, Wilson’s longtime top strategist, might be available to help Yeltsin. They were–and they immediately enlisted Richard Dresner, a New York-based consultant who had worked with them on many of Wilson’s campaigns.

Now did Bill Clinton himself did not arrange these meetings, and he himself did not organize the project; but he was fully aware of what was going on, as Time Magazine noted.

So while Clinton was uninvolved with Yeltsin’s recruitment of the American advisers, the Administration knew of their existence–and although Dresner denies dealing with Morris, three other sources have told Time that on at least two occasions the team’s contacts with Morris were “helpful.”

In order to keep the election collusion operation a secret, special code was used to identify each party; Clinton was one of these parties.

Communicating in code — Clinton was called the Governor of California, Yeltsin the Governor of Texas — the Americans sought Morris’ help. They had earlier worked together to script Clinton’s summit meeting with Yeltsin in mid-April. The main goal then was to have Clinton swallow hard and say nothing as Yeltsin lectured him about Russia’s great-power prerogatives. “The idea was to have Yeltsin stand up to the West, just like the Communists insisted they would do if Zyuganov won,” says a Clinton Administration official. “By having Yeltsin posture during that summit without Clinton’s getting bent out of shape, Yeltsin portrayed himself as a leader to be reckoned with. That helped Yeltsin in Russia, and we were for Yeltsin.”

And the strategy worked. Yeltsin ended up winning the election; as Dresner stated, “the only thing voters we’ve spoken with like less than Yeltsin is the prospect of upheaval.” Yeltsin looked strong, and willing to stand up to the West, something that Russians had become used to under the Soviet totalitarian government. The United States government got what it wanted in the Russian election in no small part due to collusion, sanctioned by the Clinton administration.

Just take a second and let this all sink in. If it is bad for our elections here in the United States, why was it so great to set up an election in another country? As Leftists like to say, who are we to override the democratic vote of a nation? If they want to have someone else, let the people speak!

Well, they did; albeit, after the United States government worked to alter public opinion in a foreign country to get what they wanted. And Time Magazine applauded it.