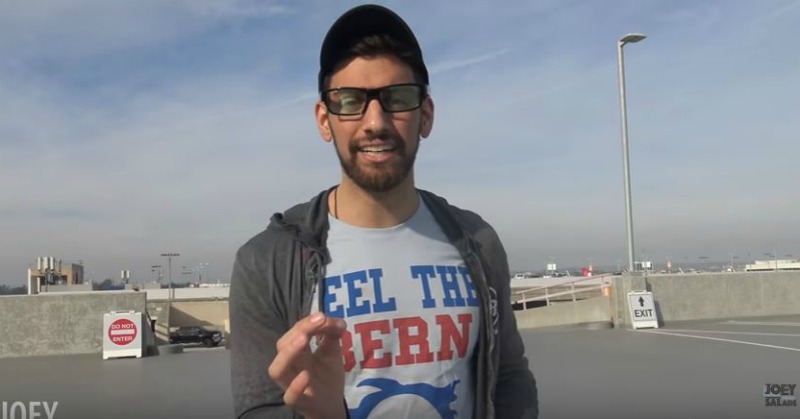 The Left’s massive, dangerous hypocrisy was reportedly outed by a YouTuber who asked protesters of President Donald Trump’s temporary immigration travel ban if they would be willing to house refugees or open up their wallets to help out.

So, arming himself with spectacles and a “Feel the Bern” T-shirt, Salads went “undercover, as a leftist” to ask the question: Would protesters be willing to put their money where their mouths are and offer to let refugees live with them?

Salads walked over to a group of protesters and introduced himself as a member of a group that “just got approved by the commissioner of naturalization.”

He asked the group of virtue signalers if they would “give donations or to possibly offer shelter.”

These whiny Leftists that want America to open its doors to hordes of refugees couldn’t be bothered to open their own doors, nor were they willing to part with much, or any in some cases, of their money.

“I have no resources. Sorry,” one individual responded.

Salads noted that another offered a “small donation” on the clipboard but wasn’t interested in offering housing for refugees.

Yet another claimed that he’s “not able to do that.”

Now this is my favorite: one woman actually threw a man that she lives with, and claimed is a Trump supporter, under the bus to explain away her unwillingness to put her money where her mouth is.

“I live with a man who is a Trump supporter,” she said and added “so I don’t think he’d go for it.”

I guess getting another roommate isn’t in the cards for said virtue signaler.

Yes, because it’s not reasonable to be nervous about housing someone that comes from a literal rape culture…

Salads pushed the man further and asked: “How many refugees will you be willing to hold?”

The guy tried to weasel his way out of it by saying he only had one couch available, but Salads wasn’t done.

Salads pointed out that the couch would be fine and that he’d just need to provide “food and water.”

Now the guy squirmed and asked how long he’d have to suspend being a massive hypocrite. Salads responded: “Until legislation passes.”

The guy whined: “I don’t know that I could commit to that.”

A female who told Salads she lives by herself and is “also apprehensive” did request to be added to an email list — but another who says she lives in a studio with her boyfriend indicates she doesn’t have enough space.

One guy standing on a ledge with signs around his neck gets a little miffed with Salads’ continued pressing: “I already answered you, OK?”

So in summary, Leftists want to virtue signal and protest Trump’s common-sense ban, even though many are aware of how dangerous it is to open their doors to refugees, and/or are such turdbuckets that they aren’t willing to actually do anything themselves to help these refugees who they claim we need to stupidly allow into the country.

This is the modern Left: both dangerous and pathetic.