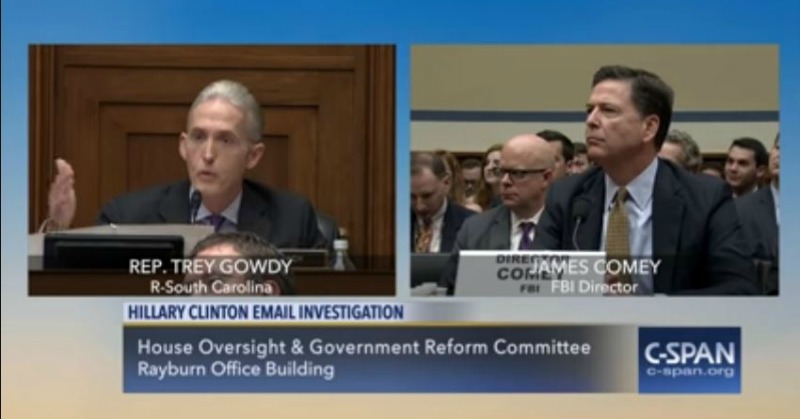 FBI Director James Comey admitted that the investigation of Democrat presidential nominee Hillary Clinton’s use of private, unsecured email servers to send classified information was “extremely careless,” but failed to recommend an indictment based on what he claimed was a lack of intent.

Gowdy reviewed the interview notes taken during the FBI’s interview of Clinton, and spoke about his findings Thursday on Fox News:

Townhall highlighted these quotes from Director Comey’s statement in July where he revealed the FBI would not recommend criminal charges against Clinton. Townhall author Katie Pavlich highlighted certain passages in bold:

Although we do not have complete visibility because we are not able to fully reconstruct the electronic record of that sorting, we believe our investigation has been sufficient to give us reasonable confidence there was no intentional misconduct in connection with that sorting effort.

Although there is evidence of potential violations of the statutes regarding the handling of classified information, our judgment is that no reasonable prosecutor would bring such a case. Prosecutors necessarily weigh a number of factors before bringing charges. There are obvious considerations, like the strength of the evidence, especially regarding intent.

In looking back at our investigations into mishandling or removal of classified information, we cannot find a case that would support bringing criminal charges on these facts. All the cases prosecuted involved some combination of: clearly intentional and willful mishandling of classified information; or vast quantities of materials exposed in such a way as to support an inference of intentional misconduct; or indications of disloyalty to the United States; or efforts to obstruct justice. We do not see those things here.”

As Townhall noted, intent is not even a requirement for prosecution over the mishandling of classified information. That said, if Comey was hell-bent on proving intent, shouldn’t there have been questioning as to her intent?

Gowdy also called for the FBI’s interview notes to be made public, as they have so far refused to release them.