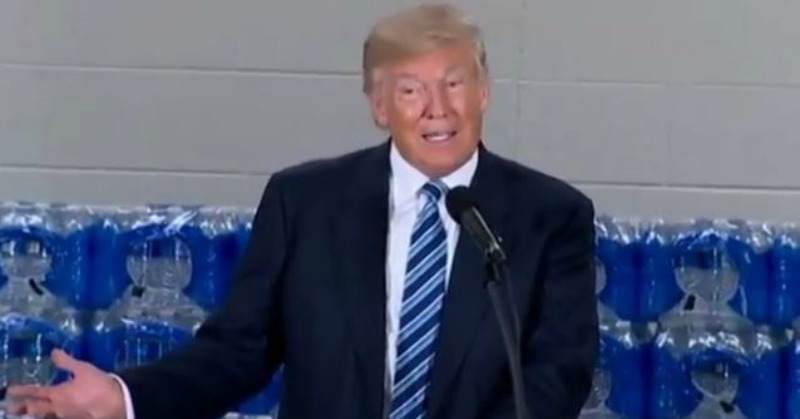 GOP presidential nominee Donald Trump visited Flint, MI on Wednesday, where he toured the Flint water treatment plant as the city has undergone a devastating water crisis that has spanned over two years. During his remarks, he showed exactly why he needs to be president.

Ford Motor Company recently announced that it was going to move all its small-car production to Mexico, and Trump had a perfect line that used both stories to sum up a major reason why Trump needs to be elected in November.

Trump: "Now the cars are made in Mexico, and you can't drink the water in Flint" https://t.co/6OZtrfIwim https://t.co/XTy1fmvsHN

The line is brilliant and whoever wrote it (if it wasn’t Trump, of course) deserves a big raise as it simultaneously decimated liberal open-border policies and made the succinct case for why Trump needs to be elected president.

Michigan has been hit especially hard by policies that drive businesses out of the country and leave our workforce impoverished. The Great Lakes state’s manufacturing sector is key to its economy — and this country has for years been determined to all but eliminate the critical sector.

The left wants open borders and over burdens business with stifling regulations. To be fair, there are plenty of open-border Republicans (as evidenced by the backlash Trump has experienced within the Republican Party) that oppose America-first policies for different reasons.

The GOP candidate went on to outline how Flint, the birthplace of General Motors, went from being a thriving, bustling manufacturing hub to what it is today — a city devastated by poverty as factories closed and jobs went elsewhere.

Henry Ford knew that people needed to be able to buy his product in order for his company to thrive. Trump understands this concept whereas globalists on the left and the right fail to understand that America needs a thriving middle class.

If there’s no middle class, which both sides to varying degrees seem determined to decimate, there is no America. It’s as simple as that, and Trump outlined in his brilliant remarks in Flint just what happens when this country doesn’t realize this.

As the left concerns themselves with social engineering, Americans are suffering.

We either “make America great again,” or we go down the tubes into oblivion. Let’s hope that voters wise up and choose the former, not just in the presidential election, but also the many Congressional seats up for grabs in November.