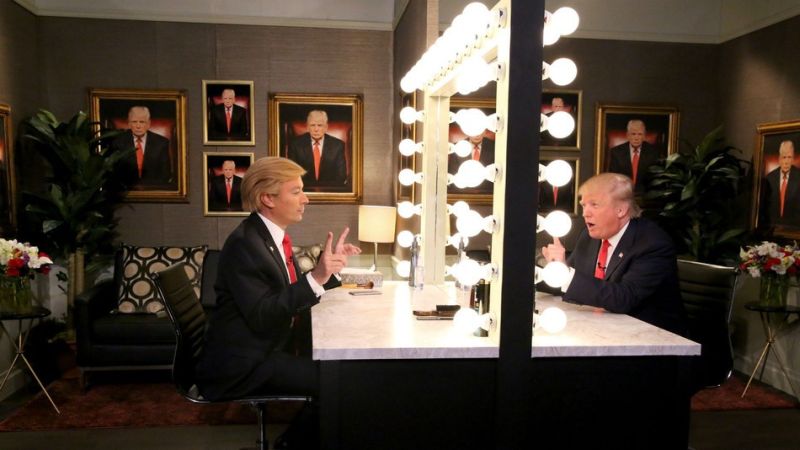 Donald Trump was playing along in EPIC fashion in a Tonight Show skit with….himself? You gotta watch this.

Of course, the day that he appeared on late night television was not lost on either man. Fallon had some questions for the Presidential candidate.

“In a certain sense it means strength, because the way the city bounced back. I’ve never seen anything like it,” Trump said. “There is a great strength and resilience we have in this country. We have amazing people.”

His words were greeted by loud cheers from the studio audience, and it became apparent why Trump is currently leading the race (“by a lot,” as he noted) for the Republican presidential nomination; he projects confidence like a superpower, a belief that he is great, and that all of America can be, as well. (His appeal was heightened by the fact that he managed to go the whole interview without saying anything racist or sexist.)

Still, the idea of Donald Trump, legitimate presidential candidate, is a little mind-boggling for those who see him as merely an over-the-top reality TV personality. Fallon attempted to parse it out, asking, “For you, when did it become real? Was it always real?”

“People are tired in this country of being ripped off,” Trump responded, citing the Iran deal and veteran health issues as prominent government failures. “I’m an efficient guy, I’ve built a great company, and this is the kind of mindset we need now in this country. We need to become rich again, and we’re gonna be great again.”

Earlier in the show, during his Friday “thank-you notes” segment, Fallon thanked Trump not only for coming on the show in person but also for appearing “in every monologue from the past few months.” Fallon asked Trump about making the transition from joke fodder to serious contender.

“I’m a comedian, I come out here every night, I have to make jokes about everybody,” he told Trump. “I gotta say, probably eight months ago if I said your name as running for president, it would get a laugh. And then all of a sudden, you started seeing a switch.”

Trump’s meandering response — which veered everywhere from a past conversation with Texas business mogul Mark Cuban to searching for stadium locales before landing on, “There’s a movement going on in this country and it’s beautiful to watch” — gave a confused Fallon something of an answer.

“This is maybe what’s refreshing about you,” Fallon mused. “You’re off-the-cuff. You dig yourself in a hole, and instead of getting yourself out of the hole, you just keep digging.”