Watch as President Trump says that the only reason Democrats want to impeach him is because it’s the only way they can win in 2020:

REPORTER: “Do you believe it is a foregone conclusion that the House will impeach?”

TRUMP: “I think they want to. Any Democrat wants to because they’re not going to beat me in the election. So of course they want to impeach.

Why would they want to impeach me? It’s so illegitimate. It cannot be the way the Founders, our great Founders meant this to be.

And if anybody else, if any of these people I’ve been watching on the stage got elected, your 401(k)s would be down the tubes.

So I think they want to impeach me because it’s the only way they’re going to win.

Then they have an informant. Oh, the informant is — where is he?

One of them said just recently, a very, very highly respected man — I’m not going to get into their names, but he said, ‘No, no, we were very, very bothered by Joe Biden and his son back during the Obama Administration.’

He’s supposed to be their witness.

Don’t forget, many of these people were put there during Obama, during Clinton, during the never-Trump or Bush era.

Those people might be worse than the never-Trumpers. The good news is they’re dying off fast.

They’re on artificial respiration, I think. But, no, impeachment, they want to impeach and they want to do it as quick as possible.” 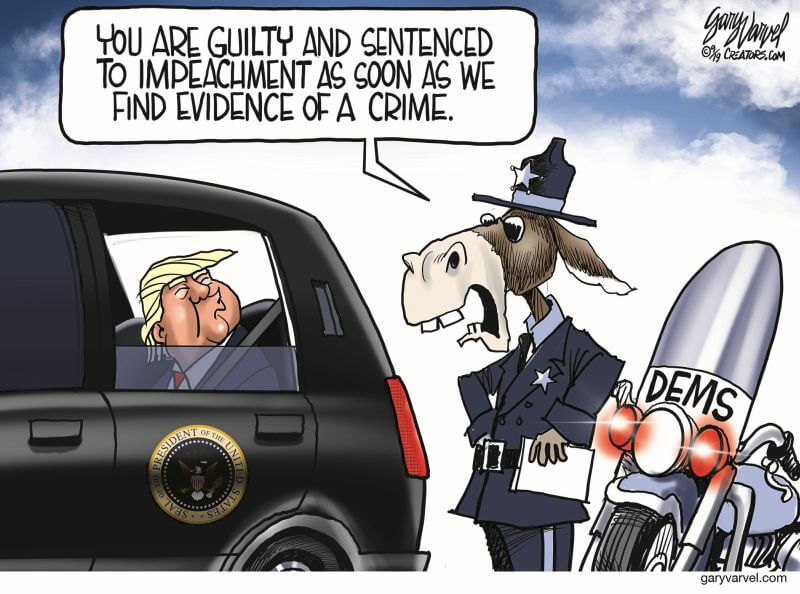