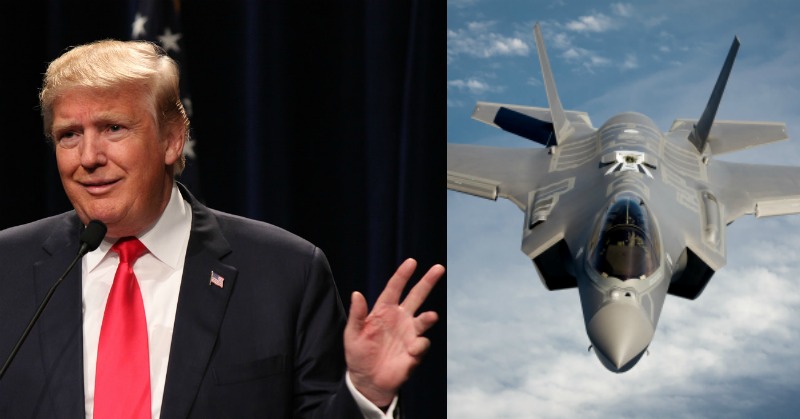 President-elect Donald Trump has set his sights on the F-35 as he looked to find a comparable option that would not be as expensive, after he successfully pushed Boeing to work on bringing costs down for a new Air Force One fleet.

Trump tweeted: “Based on the tremendous cost and cost overruns of the Lockheed Martin F-35, I have asked Boeing to price-out a comparable F-18 Super Hornet!”

Based on the tremendous cost and cost overruns of the Lockheed Martin F-35, I have asked Boeing to price-out a comparable F-18 Super Hornet!

Trump’s team told reporters earlier Thursday about efforts to bring down the cost of the F-35.

The tri-service F-35 is the most expensive weapons program in history. It comes in three variants: a conventional runway takeoff version for the Air Force, a Navy version that can take off and land on aircraft carriers, and a version for the Marine Corps that can take off and land vertically. The Air Force and Marine versions have achieved “initial operating capability,” meaning they are fleet-ready, and the Navy version is next.

The F-35 is a fifth generation aircraft, due to its stealthy features and integration of data from sensors.

The much older Boeing Super Hornet, on the other hand, is considered fourth generation, and is flown only by the Navy. If Trump were to opt for a Super Hornet to take the place of the F-35, or reduce F-35 buys for the Navy and fill out the rest with Super Hornets, it would be a boon for the program, which is nearing the end of its production line.

Daniel Gordon, who for 17 years dealt with government procurement issues for the Government Accountability Office and then became the administrator for federal procurement policy under the Obama administration, explained some concerns about Trump’s unorthodox way of doing things in regard to government contracts, according to The Wall Street Journal:

“The government would be violating the law to award a contract to Boeing without a competition [bidding process] unless they go through exceptions to the normal legal requirements for competition.”

Gordon also noted that this specific instance would not likely qualify for those exceptions.

Business Insider: Trump asks Boeing to price out a comparable jet to compete with F-35 — and Lockheed Martin’s stock is tanking

Trump has clearly shaken things up. He has called for responsible and reasonable spending in all areas of government, and by publishing updates about it on Twitter he has essentially shined a light on the underbelly of the complicated and usually unseen processes that have led to a great deal of wasteful spending.

We’ll see what comes of it; however, it is a good thing that Trump is putting pressure on the government to spend our money responsibly.

It’s highly likely that Trump is well aware that there are complexities that can’t be dealt with on Twitter; however, he’s simply using social media to let Americans know what’s going on and to put pressure on companies to do better by the taxpayers.

Sounds good to me.