The media has managed to get hold of Donald Trump’s tax returns.

The New York Times received copies of portions of Trump’s 1995 tax returns. They claim it shows he declared a $916 million loss – a number so large it could allow him to “legally avoid paying any federal income taxes for up to 18 years.”

The returns, obtained by the Times from an anonymous source, show the near-billion-dollar loss would allow him to claim zero taxes on up to $50 million every year in income from 1992 until 2010. 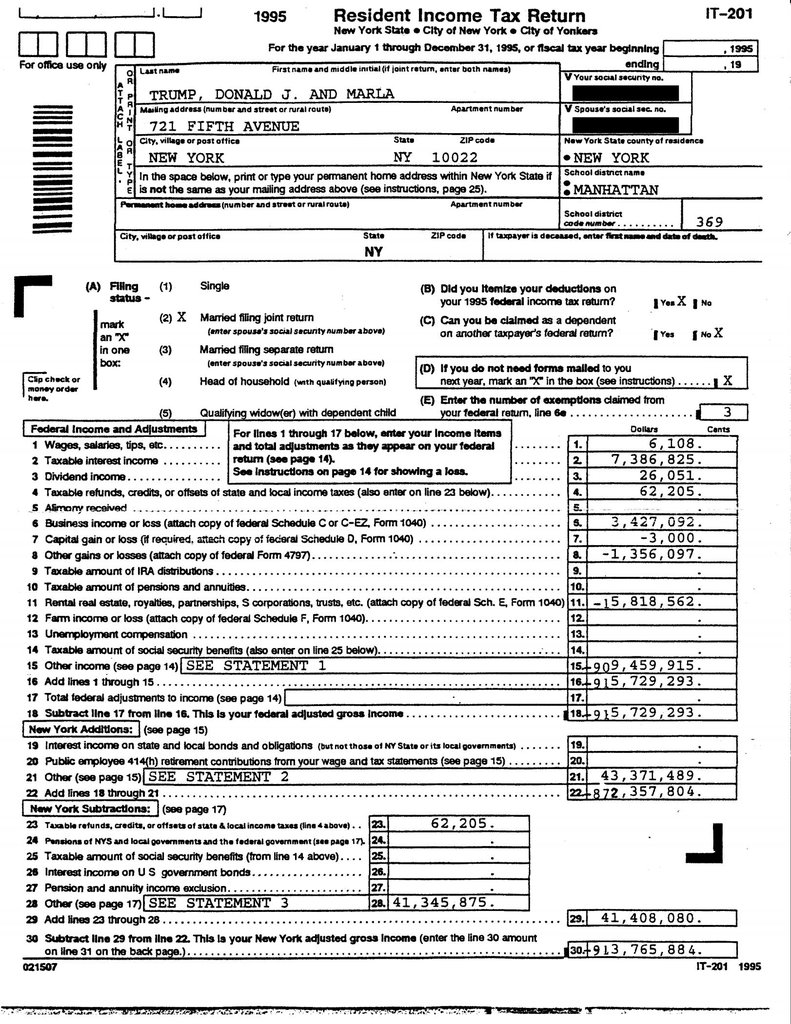 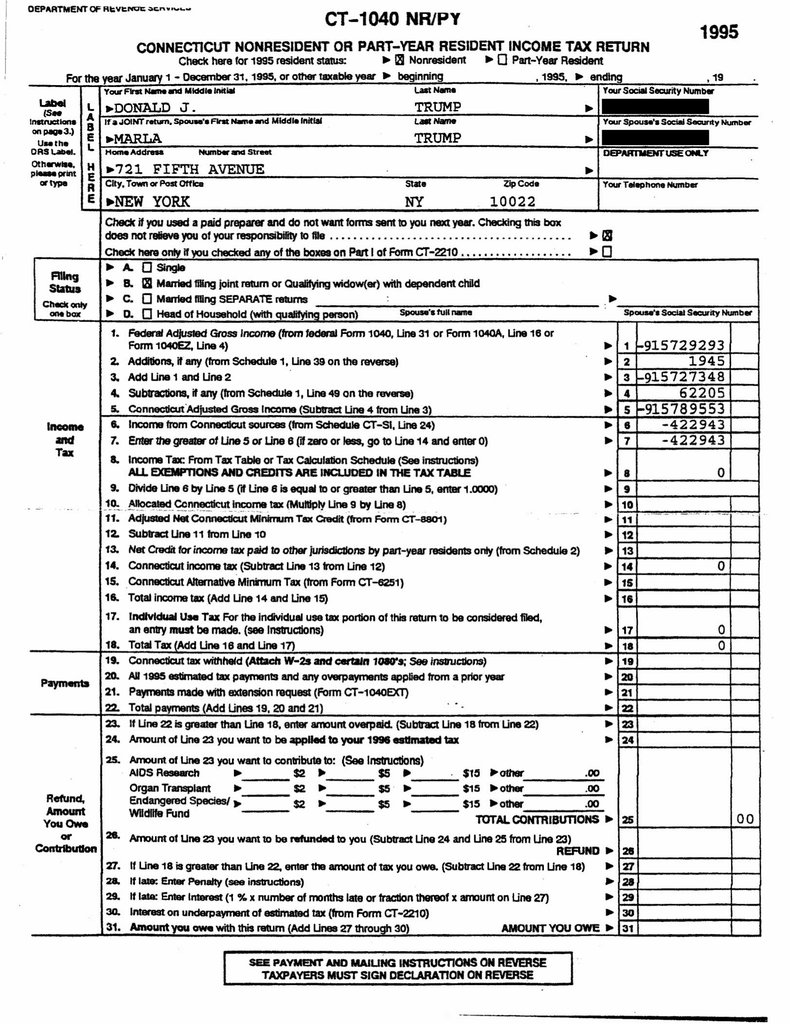 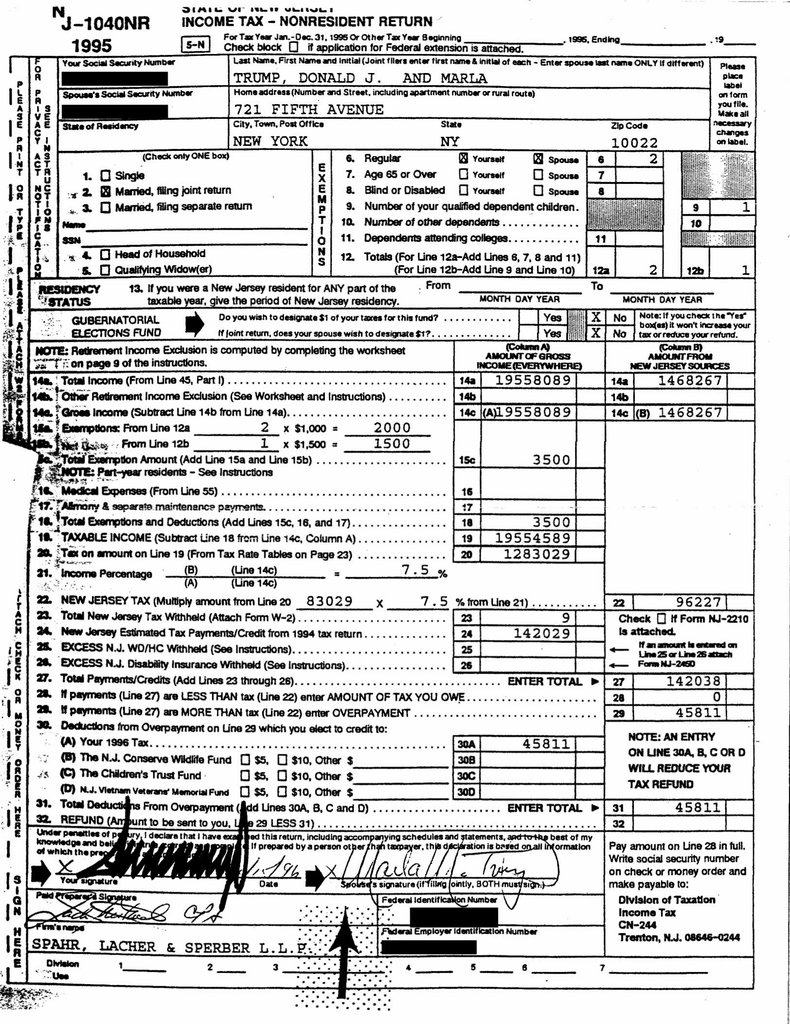 Although Mr. Trump’s taxable income in subsequent years is as yet unknown, a $916 million loss in 1995 would have been large enough to wipe out more than $50 million a year in taxable income over 18 years.

When confronted on his desire to avoid federal taxes, Trump has simply responded that it’s only something that a smart businessman would do.

During the debate, Hillary effectively accused Trump of not paying federal taxes at all. Rather than dispute the accusation at the time, Trump simply responded with “That makes me smart.”

After the debate, when he was asked if he’s ever paid federal taxes, he responded with “of course I have.”

To round out their article, The Times found a college professor to attack Trump for avoiding any federal taxes.

“He has a vast benefit from his destruction” in the early 1990s, said one of the experts, Joel Rosenfeld, an assistant professor at New York University’s Schack Institute of Real Estate. Mr. Rosenfeld offered this description of what he would advise a client who came to him with a tax return like Mr. Trump’s: “Do you realize you can create $916 million in income without paying a nickel in taxes?”

When asked by the paper about the returns and the accusation, the Trump campaign neither confirmed nor denied the massive loss.

“Mr. Trump is a highly-skilled businessman who has a fiduciary responsibility to his business, his family and his employees to pay no more tax than legally required,” the statement said. “That being said, Mr. Trump has paid hundreds of millions of dollars in property taxes, sales and excise taxes, real estate taxes, city taxes, state taxes, employee taxes and federal taxes.”

The statement continued, “Mr. Trump knows the tax code far better than anyone who has ever run for President and he is the only one that knows how to fix it.”

Trump’s attorney also sent a letter to the Times threatening legal action if the newspaper published his returns.

Still, The Times was forced to admit that while they may not like it, there’s nothing illegal about what Trump has done:

The tax experts consulted by The Times said nothing in the 1995 documents suggested any wrongdoing by Mr. Trump, even if the extraordinary size of the loss he declared would have probably attracted extra scrutiny from I.R.S. examiners. “The I.R.S., when they see a negative $916 million, that has to pop out,” Mr. Rosenfeld said.

There were only three pages mailed to The Times, so there’s no indication about any money donated to charity or his net worth.

The paper also produced a video to accompany the print article. You can tell by the black-and-white video and ominous background music that the so-called “objective” newspaper has already made up their mind that Trump is evil.