Thomas Sowell tells the truth about slavery in America that they don’t teach in schools any longer: 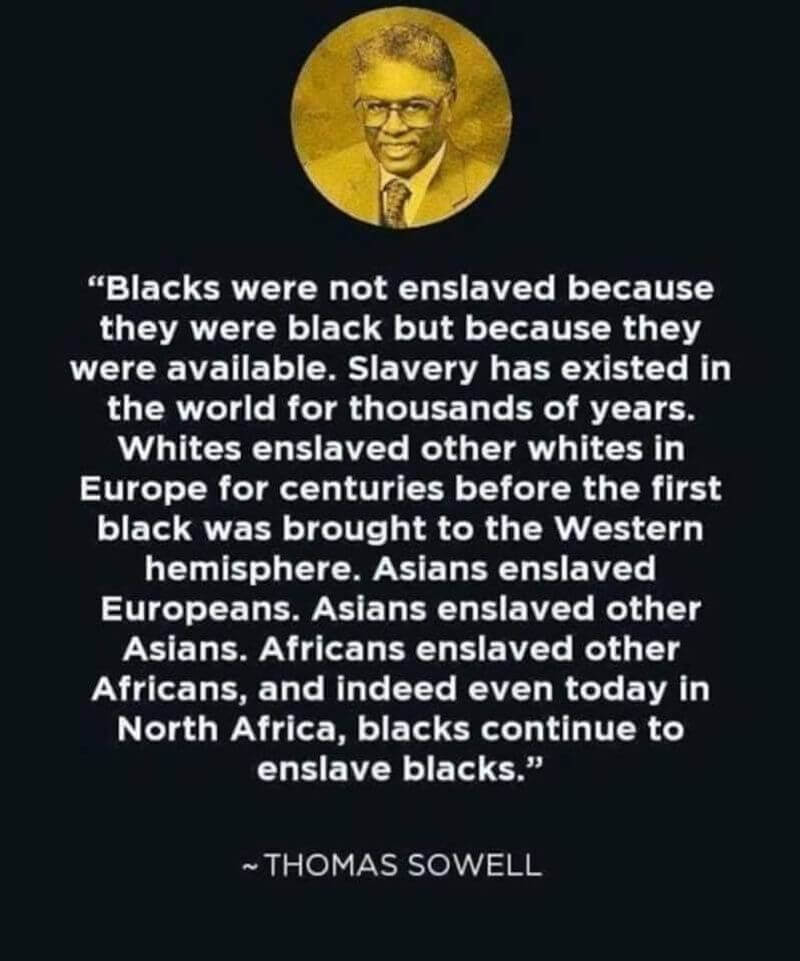 Bottom line is slavery was never about race. It’s an institution that is as old as time.

In fact Sowell believes liberalism is more dangerous to the black community than slavery ever was:

Despite the grand myth that black economic progress began or accelerated with the passage of the civil rights laws and “war on poverty” programs of the 1960s, the cold fact is that the poverty rate among blacks fell from 87 percent in 1940 to 47 percent by 1960. This was before any of those programs began.

Over the next 20 years, the poverty rate among blacks fell another 18 percentage points, compared to the 40-point drop in the previous 20 years. This was the continuation of a previous economic trend, at a slower rate of progress, not the economic grand deliverance proclaimed by liberals and self-serving black “leaders.”

Nearly a hundred years of the supposed “legacy of slavery” found most black children [78%] being raised in two-parent families in 1960. But thirty years after the liberal welfare state found the great majority of black children being raised by a single parent [66%]. Public housing projects in the first half of the 20th century were clean, safe places, where people slept outside on hot summer nights, when they were too poor to afford air conditioning. That was before admissions standards for public housing projects were lowered or abandoned, in the euphoria of liberal non-judgmental notions. And it was before the toxic message of victimhood was spread by liberals. We all know what hell holes public housing has become in our times. The same toxic message produced similar social results among lower-income people in England, despite an absence of a “legacy of slavery” there.

If we are to go by evidence of social retrogression, liberals have wreaked more havoc on blacks than the supposed “legacy of slavery” they talk about.

There you have it. Thank you Thomas Sowell!