Here’s a truth about strict gun control laws that everyone should see: 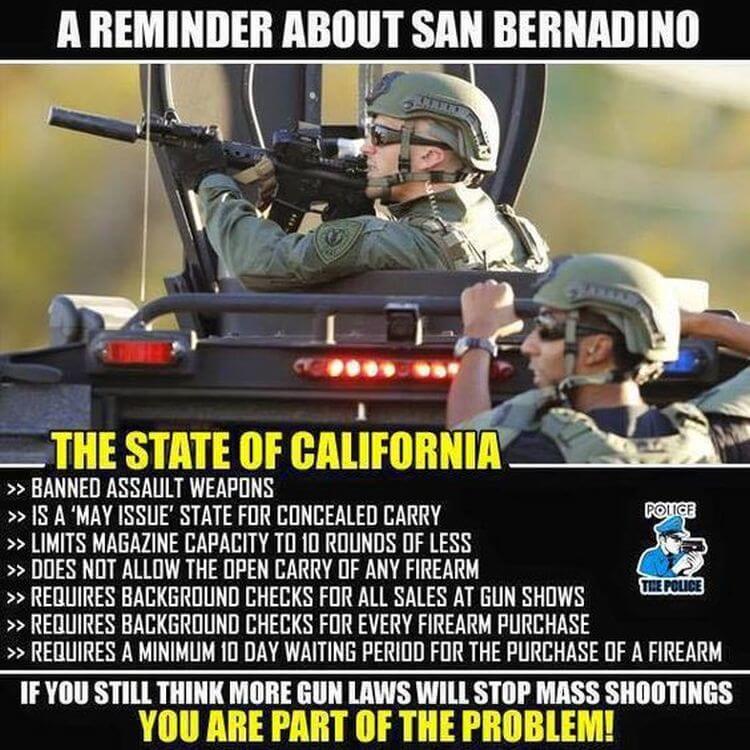 In today’s hyper speed news cycle older stories tend to be forgotten but the gun control lesson from the mass shooting in San Bernardino should never be forgotten.

In fact gun control kills, which appears to be lost on Dick’s:

Dick’s Sporting Goods has jumped into the Democratic Party’s gun control bandwagon and is now learning there’s a price to be paid.

First, a major firearms association has kicked Dick’s out, not for taking AR rifles out of it’s stores, but for hiring lobbyists in Washington D.C. to push for more gun control laws:

The National Shooting Sports Foundation (NSSF) told the Washington Free Beacon its recent decision to expel Dick’s Sporting Goods was based on the company’s decision to lobby for new gun-control legislation.

“They went beyond simply making decisions for their own company and are trying to impose their view and their decisions on other companies in the industry by hiring a lobbyist to lobby for gun control,” Larry Keane, NSSF senior vice president and general counsel, told the Free Beacon. “The CEO of Dick’s, which owns Field and Stream, is on the record as saying he wants to see a ban on modern sporting rifles, he wants to see restrictions on magazines, and also wants to see an unconstitutional restriction on the ability of young adults to purchase any firearm.”

Keane said that while NSSF did not agree with Dick’s decision to remove certain rifles and ammunition magazines from their shelves, the decision was “not because of their internal decision about what products they would and wouldn’t sell.”

“We respect the right of companies to make their own decisions,” he said.

Instead, he said, the board’s decision was based on Dick’s new attempt to impose their view on other gun retailers through new gun-control laws.

Now Dick’s is losing the rest of it’s gun business as manufacturers sever ties with the retailer:

Several major gun manufacturers said they were severing ties with Dick’s Sporting Goods in response to the company’s February announcement it would no longer sell assault-style weapons due to the deadly Parkland school shooting.

Dick’s Sporting Goods announced in the aftermath of the Parkland school shooting that it would stop selling assault-style weapons.

“It has come to our attention that Dick’s Sporting Goods recently hired lobbyists on Capitol Hill to promote additional gun control,” Mossberg & Sons CEO Iver Mossberg wrote in a press release. “Make no mistake, Mossberg is a staunch supporter of the U.S. Constitution and our Second Amendment rights, and we fully disagree with Dick’s Sporting Goods’ recent anti-Second Amendment actions.”

The manufacturer called on customers to “visit one of the thousands of pro-Second Amendment firearm retailers” instead.

The Mossberg announcement came just one day after MKS Supply, which makes Hi-Point firearms, also announced it would pull out of Dick’s. Last week, gun manufacturer Springfield Armory said it was halting business with the sport’s supply company, too.

“We believe that refusing to sell long guns to adults under age 21, while many young adults in our military are not similarly restricted, is wrong. We believe that villainizing modern sporting rifles in response to pressure from uninformed, anti-gun voices is wrong,” MKS Supply president Charles Brown wrote a statement. “We believe that hiring lobbyists to oppose American citizens’ freedoms secured by the Second Amendment is wrong. Dick’s Sporting Goods and Field & Stream, in purportedly doing all of these things, have demonstrated that they do not share our values. [We’re] standing by the American people by refusing any further sales to Dick’s Sporting Goods & Field & Stream.”

My guess is Dick’s Sporting Goods will continue to lose market share and the loyalty of it’s rapidly diminishing customer base.

Any company that lobbies to limit American’s constitutional rights deserves to go under and disappear.