The Democrats and the media portray the Black Lives Matter movement as something pure and holy when nothing could be further from the truth.

BLM is nothing more than a far left front group dedicated to the destruction of America as we know it.

In addition BLM is very selective about the black lives they seem to care about.

Here is the truth about the Black Lives Matter movement the Democrats and their media allies want to hide, brutally summed up by one cartoon: 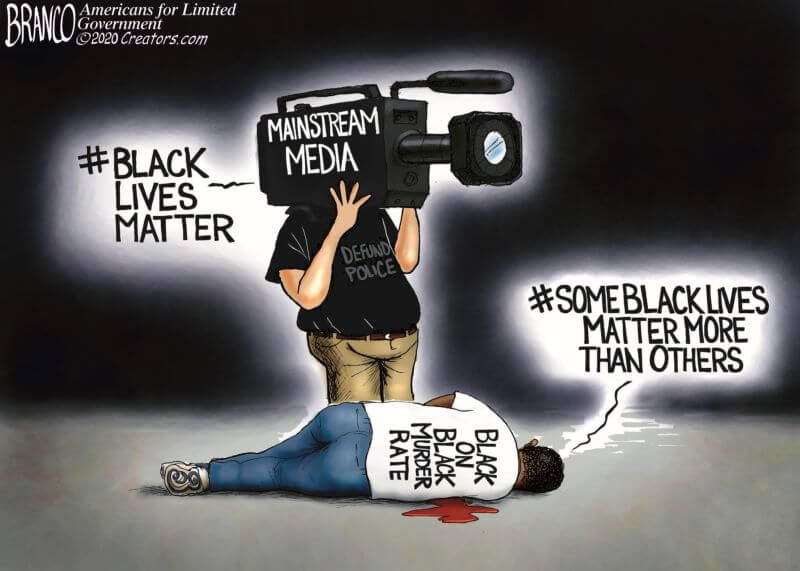 BLM only seems to care about black lives if they are taken by white people. Black on black violence? Not so much.

Black men are killing other black people at record rates but the Democrats and their media allies do not care.

Yet while BLM, Antifa, Democrats and the media are calling to defund the police, some are being a bit…hypocritical.

It turns out that over this same period of time, the city council has hired private security to to protect three of their council members from “threats” at taxpayer expense to the tune of $4,500 per day. According to Fox9 News:

The City of Minneapolis is spending $4,500 a day for private security for three council members who have received threats following the police killing of George Floyd, FOX 9 has learned.

A city spokesperson said the private security details have cost taxpayers $63,000 over the past three weeks.

The three council members who have the security detail – Andrea Jenkins (Ward 8), and Phillipe Cunningham (Ward 4), and Alondra Cano (Ward 9)– have been outspoken proponents of defunding the Minneapolis Police Department.

So the average citizen will have a department of community saftey and violence prevention “prioritizing a holistic, public health-oriented approach” run by a director who “will have non-law enforcement experience in community safety services, including but not limited to public health and/or restorative justice approaches” for protection while their city council gets personal armed guards.

Apparently in Minneapolis it is security for some, the elite, those in office, but not for the public at large who pays the bill either way.