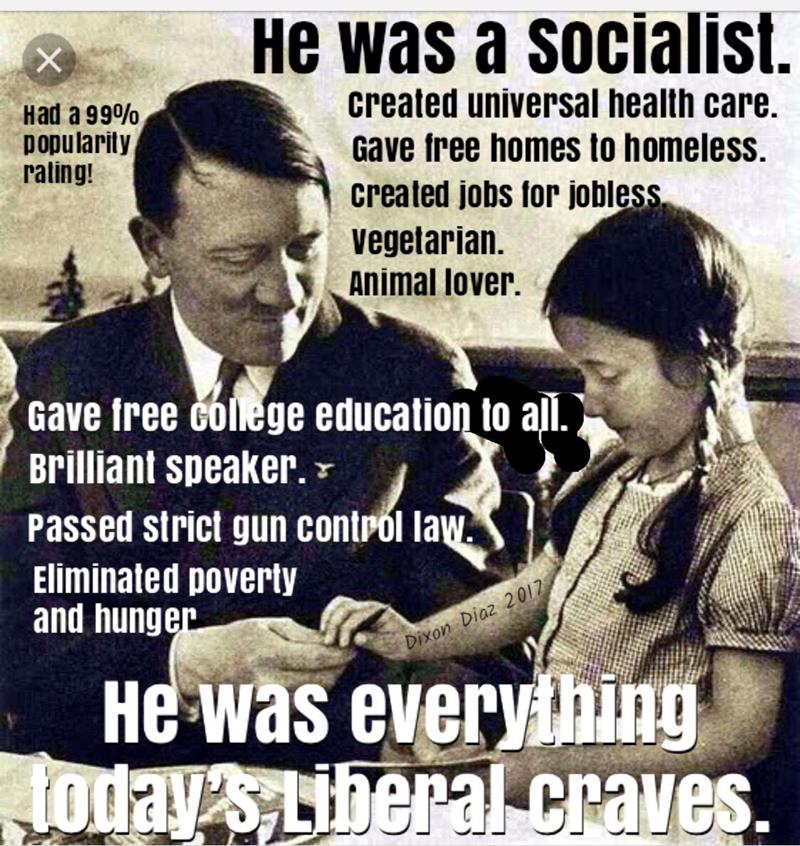 The Truth About National Socialists: They’re Anything But “Far Right” — by Brian Thomas:

The neo-Nazi and neo-Confederate groups who took to Charlottesville to rally were not conservatives, nor Republicans, nor right-wing; and their fight with Antifa was a battle of leftists against leftists, according to Jeffrey Lord of The American Spectator.

The media has tried hard to portray the hate groups that rallied in Charlottesville as “the Right,” but in truth, they are far from it.

A brief study of history reveals the Democratic Party’s historical ties to pro-slavery Confederates and the KKK.

So why are modern Confederate sympathizers and Nazis portrayed by the media as “the Right?”

Nazis were, after all, national socialists, not conservatives.

At the Spectator, Lord explains how the media gets it wrong to portray these leftist groups as “the Right” — perhaps on purpose:

Let’s turn to economist Ludwig von Mises and his classic text from the Austrian School of Economics: Socialism. The first edition of the book refuting “virtually every form of socialism ever devised” appeared in 1922, and as another famed economist, F.A. Hayek, would write in his foreword to the book: “When Socialism first appeared in 1922, its impact was profound. It gradually but fundamentally altered the outlook of many of the young idealists returning to their university studies after World War I. I know, for I was one of them.”

Twenty-five years later von Mises updated the book with an epilogue, which took on Nazis, Fascists and Communists in the aftermath of World War II.

It is important to realize that Fascism and Nazism were socialist dictatorships. The communists, both the registered members of the communist parties and the fellow-travelers, stigmatize Fascism and Nazism as the highest and last and most depraved stage of capitalism. This is in perfect agreement with their habit of calling every party which does not unconditionally surrender to the dictates of Moscow — even the German Social Democrats, the classical party of Marxism — hirelings of capitalism.

It is of much greater consequence that the communists have succeeded in changing the semantic connotation of Fascism. Fascism…was a variety of Italian socialism […]

Dictatorship and violent oppression of all dissenters are today exclusively socialist institutions.

The philosophy of the Nazis, the German National Socialist Labor Party, is the purest and most consistent manifestation of the anti-capitalistic and socialist spirit of our age […]

The slogan into which the Nazis condensed their economic philosophy, viz., Gemeinutz geht vor Eigennutz (i.e., the commonweal ranks above private profit), is likewise the idea underlying the American New Deal and the Soviet management of economic affairs. It implies that profit-seeking business harms the vital interests of the immense majority, and that it is the sacred duty of popular government to prevent the emergence of profits by public control of production and distribution […]

For more than seventy years the German professors of political science, history, law, geography and philosophy eagerly imbued their disciples with a hysterical hatred of capitalism, and preached the war of “liberation” against the capitalistic West. The German “socialists of the chair,” much admired in all foreign countries, were the pacemakers of the two World Wars. At the turn of the century the immense majority of Germans were already radical supporters of socialism and aggressive nationalism. They were then already firmly committed to the principles of Naziism. What was lacking and was added later was only a new term to signify their doctrine.

When the Soviet policies of mass extermination of all dissenters and of ruthless violence removed the inhibitions against wholesale murder, which still troubled some of the Germans, nothing could any longer stop the advance of Naziism. The Nazis were quick to adopt the Soviet methods. They imported from Russia: the one-party system and the pre-eminence of this party in political life; the paramount position assigned to the secret police; the concentration camps, the administrative execution or imprisonment of all opponents; the extermination of the families of suspects and of exiles; the methods of propaganda; the organization of affiliated parties abroad and their employment for fighting their domestic governments and espionage and sabotage; the use of the diplomatic and consular service for fomenting revolution; and many other things besides. There were nowhere more docile disciples of Lenin, Trotsky and Stalin than the Nazis were.

The Nazis’ application of socialist doctrine was at the core of their takeover, war, and Holocaust, which used nationalism and racism to rally support.

Lord goes on to quote Charlottesville rally-goers such as organizer Jason Kessler, who believes that “our entire country would be better off if the South had won the Civil War,” and Nationalist Front founder Matthew Heimbach, who says “Globalism is the enemy of all of us. And the Jewish oligarchs and the capitalists and the bankers want to enslave the entire world.”

Kessler and Heimbach are not conservatives. Heimbach is a nationalistic, capitalism-hating socialist. The only thing that really separates him from his Antifa rivals is his white supremacism. 152 years after the end of the Civil War, Kessler is still a traitor to the Union who continues to side with the nineteenth century’s Democratic, pro-slavery South.

Message to the mainstream media? No, Nazis, Neo-Nazis and fascists are not “the Right.” They are not about principles of freedom, liberty, limited government, and the civic society. They are about race, the glorification of The State, and hating capitalism.

Has Jeffrey Lord finally put the myth of the autocratic, supremacist “Right” to bed?

Let us know what you think, and sound off in the comments section below.