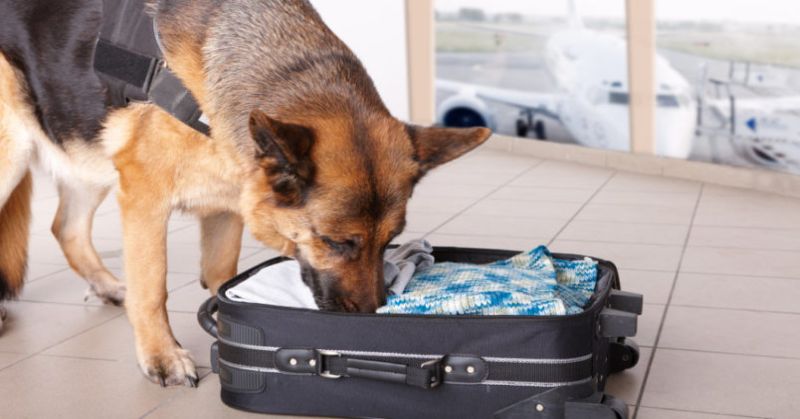 In a week when the mainstream media has been milking a dead gorilla for all that it’s worth, another animal tale is serving as a nice distraction from big problems in the nation’s airports. The TSA – which should be an acronym for Thousands Standing Around – is looking for all of the positive public relations that it can get and the media is delivering.

So pay no attention to those humongous lines at airport checkpoints; the TSA has a wonderful public relations piece to sell you. Americans love their pets and always adore tales of wonder about man’s best friend and even better yet – the TSA dogs are being used to keep us all safe. In order to provide a soothing balm to the grueling wait times, the uniformed government goons with ranks full of abusive gropers and the mounting tally of missed flights, the post 9/11 domestic police are calling out the dogs.

According to the New York Times“T.S.A. Trains Dogs to Stay One Sniff Ahead of Bomb Makers”

Just after dawn on a recent May morning, Ajax, a 2-year-old black Labrador retriever, eagerly worked his way through a sparsely furnished room sniffing for explosives. On his third try, he picked up a scent behind a piece of furniture near the front of the room.

“Good dog, good dog,” said Andrew Baxter, his trainer, who reached into a pouch and threw Ajax a squeaky toy, much to the dog’s delight.

Ajax is one of 230 dogs at the Transportation Security Administration’s facility here on Lackland Air Force Base training to become bomb-sniffing canines. Dogs that pass the course will be deployed to the nation’s airports, a first line of defense against terrorist bomb attacks.

The assignment is becoming increasingly difficult as terrorists adopt techniques using household chemicals to construct bombs that make it hard even for a dog’s sensitive nose to discern.

The public relations campaign is as slick as it is diabolical for the TSA will be increasing the presence of canines in airports as an extra layer in the conditioning of Americans to submit to the ever-expanding authority of the federal government. It’s the perfect example of the boiling frog metaphor that if you toss a frog into a pot of extremely hot water it will try to escape; conversely, if the same frog is placed into a pot of warm water and the temperature slowly increased in unnoticeable increments, it will stay there until it is cooked. There is plenty of soup on the menu in America’s future.

CNN chimes in with the article “Could this solve TSA’s security line problems?”:

The answer to long airport security lines could be our furry four-legged friends.

Explosive-detecting canines help make the screening process faster by clearing some travelers to go through Precheck security lanes, which move much faster because passengers don’t have to remove their shoes and belts or take out liquids or laptops.

The TSA reports that 75% of Precheck lanes moved people through in under 10 minutes on Monday.

And the extra assistance is definitely in demand.

Checkpoint lines across the country have reached marathon lengths thanks to an influx of passengers, with one- or even two-hour wait times being reported in recent weeks.

The TSA has announced the hiring of more than 750 officers by mid-June and added more part time and overtime hours to help alleviate some of the congestion.

The agency is also relocating dogs to help out at the busiest airports.

The media can always be counted on to shill for the government and in this time of great political, economic and societal upheaval there is probably no institution that is more culpable for the long, slow descent into fascism in America than the presstitutes who serve as the protectors of establishment power. The presence of the Soviet style checkpoints in our airports has always seemed like something out of a foreign time and place – like the USSR or East Germany – but they have been sold as an essential part of the “new normal” that is the precursor to the coming era of apple pie authoritarianism.

It’s inconceivable that the feds couldn’t have either privatized the security functions of the agency and insisted that the price-gouging airlines cough up some dough of their own to subsidize screening processes rather than bilk the taxpayers for what is essentially their own enslavement. That however would entirely defeat the unstated purpose of the agency which is to provide Leviathan with yet another tool for the day when dissent has been criminalized – a day that keeps getting closer.

One positive aspect of the dogs however is that they aren’t likely to grope or sexually molest anybody.