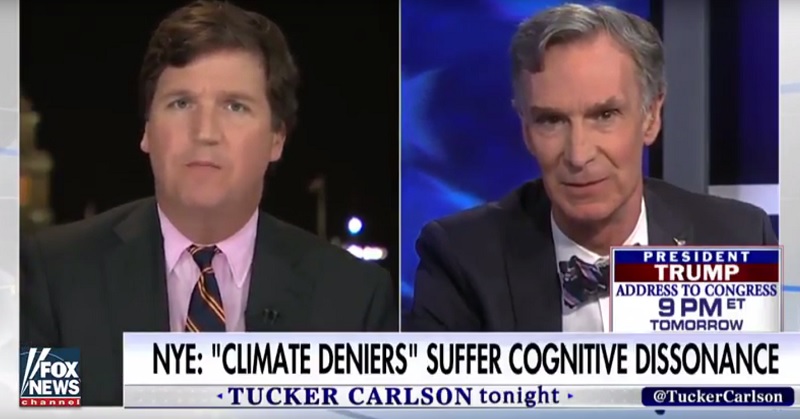 Fox News’ Tucker Carlson faced off against “Bill Nye the Science Guy” over climate change during his Monday night broadcast.

Carlson asked Nye (who is not a scientist) about recent comments he made saying that “climate deniers” suffer from psychological delusions.

“To the deniers out there. I want you to think about what is called cognitive dissonance,” he said. “Instead of accepting that the climate is changing, deniers are denying the evidence and dismissing the authorities.”

Tucker didn’t like that comment and challenged Nye on why people shouldn’t be more skeptical. He specifically honed in on the issue of exactly how much human activity has contributed to climate change, Brietbart reports.

Nye said there’s simply no question that human activity has sped up climate change and this is a matter that has been settled by the vast majority of the scientific community.

They went back and forth as Carlson demanded more specifics and Nye provided examples. Carlson said that he’s “doing a grave disservice to science” by limiting debate.

After Carlson interrupted him, Nye held up his phone and said, “This is how long it takes you to interrupt me. It takes you quite a bit less than six seconds.”

Carlson said, “So much of this you don’t know. You pretend that you know, but you don’t know, and you bully people who ask questions… I’m open-minded, you are not.”

Nye wrapped the interview by briefly making some comments about White House leaks that a stunned Carlson found rather “ominous.”

It was incredible. Take a look: