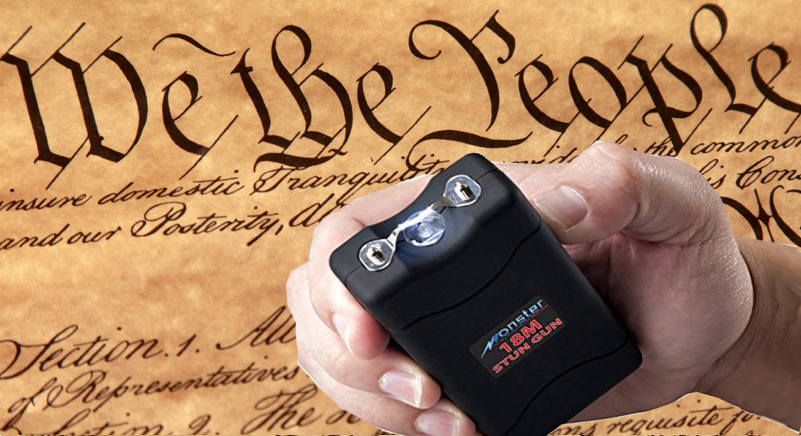 The U.S. Supreme Court thought so little of the state of Massachusetts’ ban on stun guns that it issued a new ruling rejecting the ban and essentially telling the state to revisit its faulty, anti-Second Amendment reasoning. The law was so badly written the U.S. Supremes didn’t even see a reason to hear the full case and simply issued a general ruling slapping down the state court’s attempt to uphold the law making stun guns illegal.

Issuing what is called a per curiam decision, the Supreme Court (SCOTUS) told the state its ban on stun guns did not comport with recent rulings of the highest court–in particular the Heller decision. Per curiams occur when the high court simply rules directly without assigning the decision to a specific justice and are usually reserved for decisions that the justices feel are so obvious, so non-controversial, that no further discussion is needed.

At issue was the case titled Jamie Caetano v. Massachusetts, in which a woman who was being brutally beaten by an ex-boyfriend defended herself with a stun gun. Despite the fact that the device saved her life, police arrested the woman instead of her attacker because stun guns had been made illegal in the Commonwealth.

The stun gun ban carries with it a fine of up to $1,000 and a prison sentence of as much as two and a half years for possession of the banned item. The woman, though, maintained the electronic device should be covered under the Second Amendment because she was legitimately using it for self-protection.

Her case went to the Massachusetts Supreme Court and that body ruled against her saying she was guilty and insisting the state’s law banning stun guns was crafted properly. The woman appealed her case to the highest court in the land still maintaining that a stun gun ban was unconstitutional.

The SCOTUS agreed with the brutalized woman and noted that the state’s ban law was based on faulty constitutional reasoning.

One of the false assumptions the Massachusetts legislature and the state’s highest court used to justify its ban was that electronic devices of the type didn’t exist when the framers wrote the Constitution. This, the SCOTUS said, was in direct contravention to its landmark Heller decision saying the Second Amendment was not limited to the same sort of firearms in existence at the time the Constitution was written.

As recounted by TheTruthAboutGuns.com here are the three main points as presented in the SCOTUS per curiam decision:

(2) The Massachusetts Court’s holding that stun guns were “dangerous and unusual” devices in part because they were “a thoroughly modern invention” fell for a similar reason. The Supreme Court noted that “[b]y equating ‘unusual’ with ‘in common use at the time of the Second Amendment’s enactment,’ the [Massachusetts] court’s second explanation is the same as the first; it is inconsistent with Heller for the same reason.”

(3) Finally, the Massachusetts Court’s holding that stun guns were not “readily adaptable to use in the military” fell because “Heller rejected the proposition ‘that only those weapons useful in warfare are protected.’”

The sharpest cut to the Massachusetts law states was this:

This is an extremely important ruling because it serves as a warning to every state — especially left-leaning ones — that legislatures cannot just make up any anti-gun rule they want without figuring the Heller decision into their reasoning.

While this per curiam decision didn’t directly invalidate the state legislature’s stun gun banning law, it did demand that the Mass. Supreme Court re-fashion its ruling supporting the ban to align better with the SCOTUS’ more expansive rulings on the Second Amendment which, in essence, practically guts the state’s ban.

The decision was presented without dissenting opinions attached, so this statement was essentially a demand by the whole of the high court for Massachusetts to either go back to the drawing board with its silly stun gun ban, or abandon it altogether.