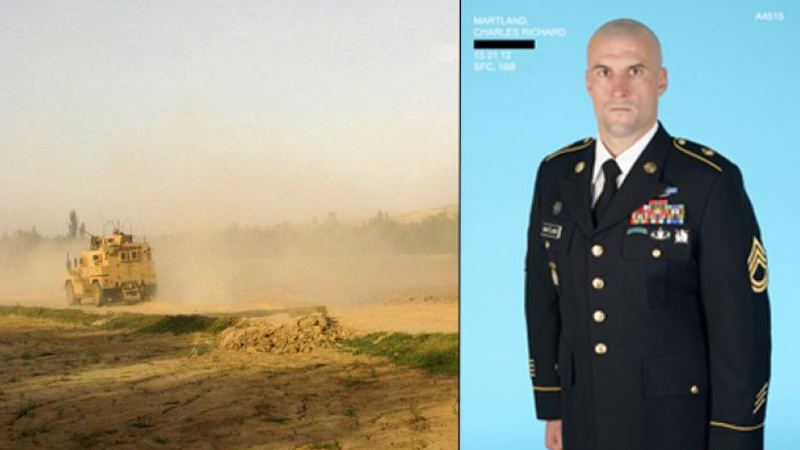 His crime? Way back in 2011, Sgt. Martland and his team leader defended the honor of a 12 year-old Afghan boy who was raped, and his mother who was beaten by a local police commander – one who had been trained and armed by Martland and other U.S. special force troops.

The young boy reported his unspeakable assault to the Green Berets in Kunduz Province, who determined his claim to be legitimate following an interview and medical exam.

Upon learning of the report, Abdul Rahman, the Afghan police commander and alleged rapist, beat the boy’s mother for making the report.

Sgt. Martland and his supervisor later confronted Rahman, who admitted to the attack and laughed it off. It was at that point that the Green Berets apparently shoved Rahman, who fell to the ground.

Even though his injuries were limited solely to bruises, the coward Rahman reported to a separate military outpost that he had been attacked by army personnel.

For their heroic actions, Sgt. Martland and his team leader were removed from field service in Kunduz Province the following day and ultimately sent home to the United States.

Martland has been described by associates as the finest soldier they have ever served with. A high school football star, he went on to play for Florida State University. After the death of Pat Tillman (who left the NFL to join the U.S. Army), Martland left college and joined the Army.

The rest is history.

He succeeded in becoming a top special forces soldier who served as a jumpmaster, combat diver and sniper. He was awarded a Bronze Star with Valor for actions taken during an attack on his unit in Afghanistan.

This man was the exact soldier the United States wants and needs fighting our battles.

Martland has been fighting ever since to remain in the Army. In February, 2015 the Army conducted a review board and Martland has been ordered “involuntarily discharged” from the United States Army by November 1, 2015.

This is outrageous! How can such an inequity happen to a man who is not only a hero for his service to the United States, but a hero to that young Afghan boy and his mother? There exists in this nation an overt assault against soldiers, marines, sailors and airmen in this country for doing what they have committed to do – protect and defend freedom. This young boy’s freedom and innocence was stolen by Abdul Rahman and Sgt. Martland is paying the price.

The top military brass that have allowed this action have should be condemned, not Sgt. Martland!

What do you think? Should Sgt. Martland have been commended and honored for his defense of young Afghan boy who was violated by a perverted police commander? Or was his punishment and ultimate discharge a satisfactory consequence for “assaulting” an Afghan police commander?

This writer firmly believes that Sgt. Martland did the right thing, and perhaps would have been justified in even greater physical contact against Abdul Rahman.

Sgt. Charles Martland ought to have a bronze statue erected in his honor that proclaims to all – “If you sexually assault or otherwise hurt a child, this man will be sent to deal with you and he will not be as kind as he was in Afghanistan!”

Dana Nottingham
Dana Nottingham believes the Constitution of the United States is one of the most important documents ever written. Watching liberals, progressives, Democrats, and even Republicans, attempt to dismantle this great document has prompted Dana to write and teach truths related to what happens not only in Washington, but in state and local governments and courts throughout the country as well.
Obama: In Your Face Catholics
Obama Changes "Human" Rights to "Sexual" Rights
Attention Bernie Sanders Supporters: Free is not Free!
United States Army Favors Child Rapist over Decorated Green Beret
Should We Make a Federal Case Out of Water Waste?
See more...