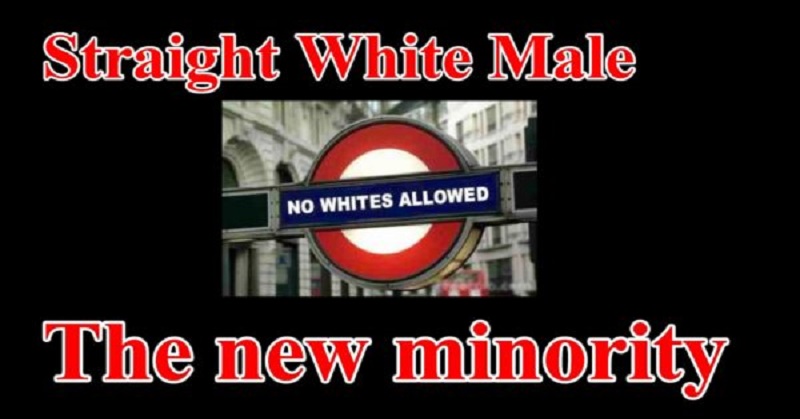 The regressive left believes everyone is equal, except heterosexual white men.

A British university recently held the most bigoted gathering possible in the name of “equality” in which “straight, white, able-bodied males” were banned from participating.

A lecturers’ union in England banned straight, white, able-bodied males from participating in an equality conference in order to create a “safe space” for conference attendees.

In order to attend the majority of the University and College Union’s equality conference, prospective attendees had to identify which “protected characteristic” they posses, such as being gay, disabled, or non-white.

An amendment to allow elected all union officers — regardless of their personal characteristics — participate in the conference was voted down by union leaders, according to Times Higher Education.

Organizers divided the conference into four sections: women, disabled, LGBT, and ethnics minorities. Attendees who didn’t possess the required “protected characteristic” would be unable to attend that section, in order to create a “safe space.” In other words, straight, white, able-bodied men would be barred from attending any of the sections.

provides further insight into the bigoted mentality of the left.

“One cannot deny the privileges that straight, white men have in today’s society,” Reid writes.”Britain is a country where less than one in 10 CEOs are women in FTSE 100 companies. Ethnic minorities are still underrepresented in parliament.These are all issues which desperately need addressing.”

She admits that the university’s decision to ban whites is “depressing” but only because it impedes on our ability to understand the culprit of minority problems.

“Excluding straight, white men from taking part in these conferences completely undermines their point,” she writes. “How are people expected to tackle minority issues when, in the most crass manner, one of the root causes of that problem is specifically excluded from participating – as though it didn’t exist?”

In reality, the wage gap between men and women exists because women and men prioritize differently. Studies show women are less represented in the workplace because of motherhood, not because of prejudice or institutional discrimination.

Isn’t it amazing what liberals are allowed to get away with in the name of fairness?

The wants young white men to self-loathe and self-destruct as a form of slavery reparation. If liberals have their way liberals will require straight white men to ride in the back of the bus and use a separate water fountains out of “compassion, empathy, tolerance, and open-mindedness.”

Western society is on the road to self destruction unless it can rid itself of this political correctness. People need to compete on their own merit.