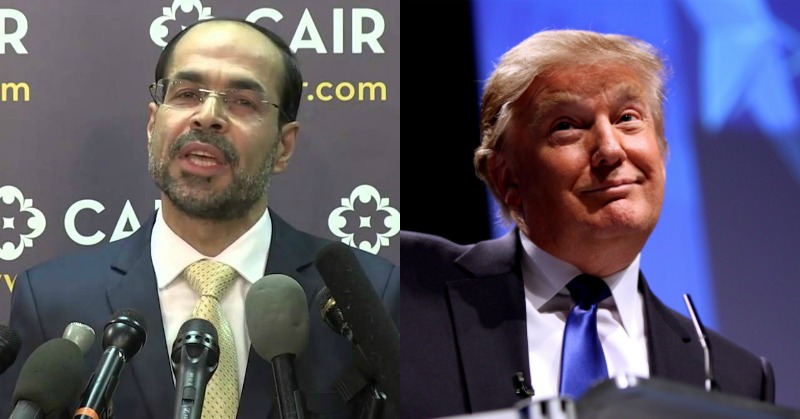 The Council on American-Islamic Relations, a group many believe should be designated a terrorist organization, is apparently feeling the heat from GOP presidential nominee Donald Trump’s pledge to crack down on radical Islam.

“One of my first acts as President will be to establish a Commission on Radical Islam – which will include reformist voices in the Muslim community. The goal of the commission will be to identify and explain to the American public the core convictions and beliefs of Radical Islam, to identify the warning signs of radicalization, and to expose the networks in our society that support radicalization … [and] we will pursue aggressive criminal or immigration charges against anyone who lends material support to terrorism.”

This apparently threatened CAIR, who proceeded to threaten Trump with a “constitutional violation” if the commission is created:

“Trump’s proposal for a ‘commission’ that would identify for Americans the tenets of ‘radical Islam’ crosses the line into government interference in religious beliefs. Will a Trump administration entangle itself in interpretation of [Islamic] religious principles? Who will Trump appoint to decide what constitutes ‘radical Islam’? His current stable of Islamophobic [sic] advisers indicates that this commission would be packed with anti-Muslim bigots.

This government promotion of a state version of a particular religion would violate the First Amendment and put America on a path to a society in which those in power get to choose which beliefs are ‘correct’ and which are ‘incorrect.’”

If CAIR was a group that supported peace between America and Muslims, why would they be so threatened with what Trump is proposing? Wouldn’t they want to root out the radical elements in their own religion if they truly did find it abhorrent?

CAIR has deep ties to radical Islam which have been well reported over the years. The United Arab Emirates has even designated CAIR as terrorists and included them on a list of Muslim Brotherhood groups. In 2009, a federal judge found that CAIR is connected to the Islamic terrorist organization Hamas that seeks the destruction of Israel through jihad.

Islamic Sharia law is fundamentally incompatible with American law. It is barbaric, dangerous, and in opposition to everything that America was founded upon.

If any Muslim truly wants to be American and turns away from Sharia law, they shouldn’t be concerned and in fact should be behind Trump’s proposal and willing to help root out the radical factions within their religion.