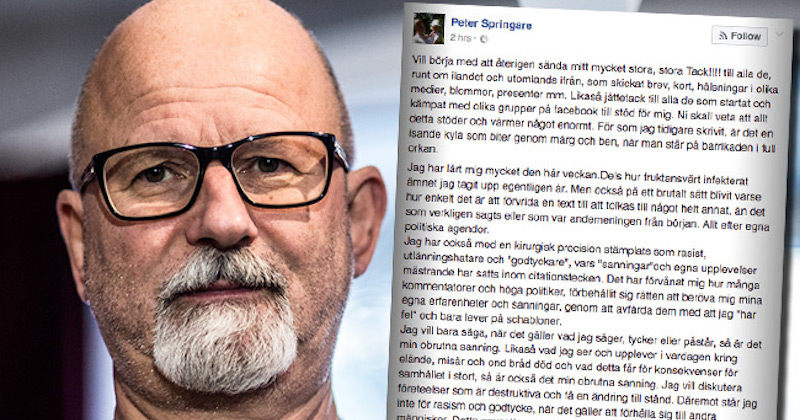 The Swedish detective has been on the force for more than 40 years.

Now he’s going public and accusing Swedish politicians and police authorities of turning a blind eye to the problem of violent crime cause by migrants because of “political correctness.”

A few weeks ago, Springare went on social media to vent his concerns after his bosses told him to stop recording the ethnicity of violent crime suspects.

The 61-year-old officer, who works in the central city of Orebro wrote “Countries representing the weekly crimes: Iraq, Iraq, Turkey, Syria, Afghanistan, Somalia, Somalia, Syria again, Somalia, unknown, unknown country, Sweden. Half of the suspects, we can’t be sure because they don’t have any valid papers. Which in itself usually means that they’re lying about your nationality and identity.”

That was enough to get him in trouble, The Daily Mail is reporting. Prosecutors launched an investigation, suggesting he was inciting racial hatred, but later dropped the charges.

Now he told The Times: “The highest and most extreme violence – rapes and shooting – is dominated by criminal immigrants,” he said. “This is a different criminality that is tougher and rawer. It is not what we would call ordinary Swedish crime. This is a different animal.”

“I’m so fu**ing tired. What I will write here below, is not politically correct. But I don’t care. What I’m going to promote you all taxpayers is prohibited to peddle for us state employees.”

Springare is due to retire soon and doesn’t fear any disciplinary action.

The migrant-friendly country hit the headlines recently when President Trump suggested the massive influx of immigrants is responsible for an increase in violent crime there.

It turns out – if Springare is right – the president was spot-on.