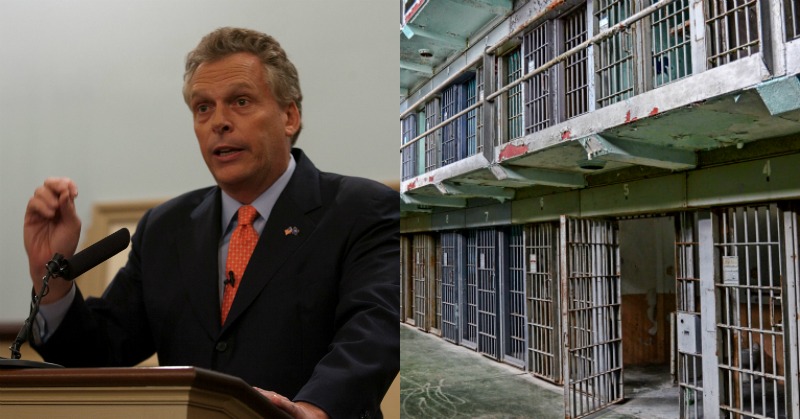 Democrats have found a new voter source — Virginia felons. Virginia Gov. Terry McAuliffe, a Democrat of course, has restored voting rights to 13,000 felons in his state according to The Wall Street Journal.

Virginia Gov. Terry McAuliffe restored voting rights to 13,000 people with felony records on Monday, a fraction of the 206,000 felons whose rights he had hoped to restore before being blocked last month by the state Supreme Court.

Mr. McAuliffe said he was granting the requests on a case-by-case basis, as required by the court.

Last month the Virginia Supreme Court in a 4-3 ruling struck down a series of orders by Mr. McAuliffe that would have offered a blanket restoration of rights for convicted felons who have served their sentences while also completing parole and probation. The court’s majority said the orders were of an “unprecedented scope” that violated limits on a governor’s power to grant clemency.

Gov. McAuliffe spoke about the move to restore felon voting rights on Monday at the Civil Rights Memorial in Richmond, where he called letting felons vote “one of the pressing civil rights issues of our day.”

McAuliffe was frustrated with Republicans for holding him accountable, but as Virginia House of Delegates Speaker William Howell said, “We have done nothing more than hold the governor accountable to the Constitution and the rule of law.”

John Whitbeck, chairman of the Virginia Republican Party, addressed the belief of many Republicans that McAuliffe’s actions are politically motivated: “Like everything else with Terry McAuliffe, it’s about politics and getting Hillary Clinton elected president rather than doing the right thing.”

Virginia is an important swing state in the 2016 presidential election that is leaning increasingly Democrat. As WSJ reported, for years Virginia went Republican but in the 2008 presidential election, it went blue voting for Barack Obama over John McCain by 235,000 votes, and 150,000 votes over Mitt Romney in 2012.

WSJ reported that McAuliffe claimed that he’s trying to “right a wrong” :

“Mr. McAuliffe said his goal is to right a wrong. Virginia has one of the strictest felon-disenfranchisement laws in the nation, he said, and the law has been used historically to suppress votes among blacks. He said the state’s civil-rights history has been difficult, but “”in the end progress has always prevailed.'”

It couldn’t have anything to do with the fact that, as WSJ reported, an analysis by McAuliffe’s office found that 46 % of those affected by his initial order were black, and blacks have historically voted Democrat in overwhelming numbers…

If his analysis found that those felons were likely to vote Republican, do you think McAuliffe would consider this a “civil rights issue?” Of course not.

GOP presidential nominee Donald Trump has been reaching out to black voters to lay out the case that Democrat policies have decimated their communities.

It would serve Democrats right if Trump’s message begins to resonate with some of these poor “disenfranchised” voters that McAuliffe surely expects to vote for Democrat nominee Hillary Clinton. As he said, “in the end progress has always prevailed.”