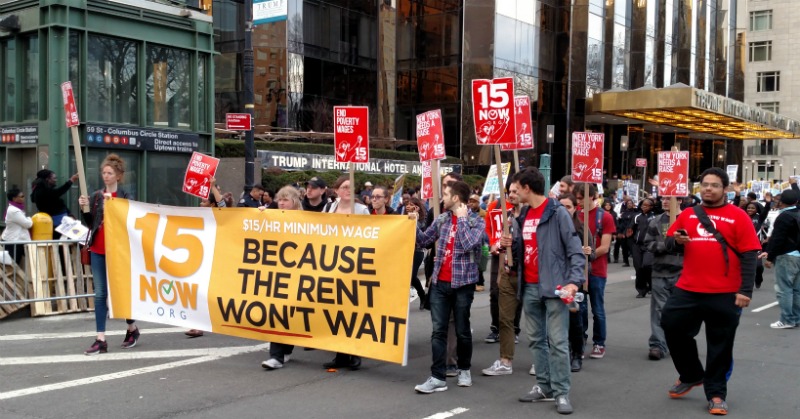 Voters in Washington approved a minimum wage increase, but apparently some didn’t think through the inevitable consequences. In response to the increase, some parents have already seen their childcare costs rise.

Some of the residents who voted to pass Initiative 1433 — a measure increasing the minimum wage statewide by 2020 to $13.50 — didn’t stop to think what effect that would have on the rest of the economy.

We heard from one mother today who will be paying $300 more a month for childcare.

Before her phone call, it’s something we hadn’t thought of – and, apparently, some voters hadn’t either.

Parents that bring their children to Advent Lutheran Child Center here in Spokane Valley recieved quite the shock this week when they were told that the pay increase to the workers will be coming out of their pockets.

Heidi Perry, director of Advent Child Care, explained that many parents were not happy with the idea of the cost increase. “I think there was a little bit of sticker shock. I had a lot of parents who walked into the office last night or this morning and say ‘am I reading this right?’ And I said yes you are.”

Perry spoke with one parent who voted in favor of the initiative not realizing that it would affect child care.

Starting in January, Advent Child Center is increasing tuition about $140 a month per child, taking tuition from $705 to $845 a month, an increase some are not ready to pay.

“It just adds to the tightness of general month to month expenditures,” said mother Dawn Ellis, who has two children enrolled at Advent Lutheran.

We reached out to several other daycares in the area, one says they haven’t even addressed this yet and another said the tuition increase is inevitable.

The sad part about this is that many people think this way, or rather, don’t think. Regardless of what anyone thinks about the minimum wage or other such measures, someone always has to pay for it.

Ellis added, “I understand that they need to capture their difference and make that money back, but then so does everybody else.”

Sure, but as conservatives have noted, those costs are usually passed on to the consumer. Many would argue that, on a moral level, businesses who can pay a decent wage should do so and not gouge consumers, but unless you’re going to mandate them to do so by the government (and do we really want to give the government that power? Who decides what the fair level is?), this is usually what happens.

This is why you have to think things like this through, and not just from an emotional standpoint.

According to KYLY-TV, although not all employees are paid at the minimum wage level, some of them are, including, in some cases, employees with college degrees.

Kristin Larson, program supervisor at Advent, evidenced the major disconnect some Americans have about the economy: “women and men who work here and go to school and get a degree in early childhood education should be paid a living wage.”

“I feel the state needs to be helping a little more,” said Larson. “It would be nice if parents didn’t have to spend a majority of their paychecks for childcare.”

Who is “the state?” The state gets its money from the people. Even if the state intervenes, that means that those costs are passed on to the taxpayer.

There is no such thing as a free lunch — well, not for working taxpayers, that is.

The left often talks about how everyone should get paid a living wage and while most people agree that it is a nice thought, it’s important to remember where that money comes from. As the left decries that conservatives are heartless in the abstract, once the sticker shock actually hits home, the left often sings a different tune.

Just like the politicians, it’s different when you’re being altruistic with money that isn’t your own, but when it actually comes out of their pockets, it’s a completely different story.

Ask a liberal who thinks that people should pay more in taxes, especially a rich liberal, to go ahead and cut a check to the IRS and see what they say…

It’s pretty funny, and sad, at the same time.