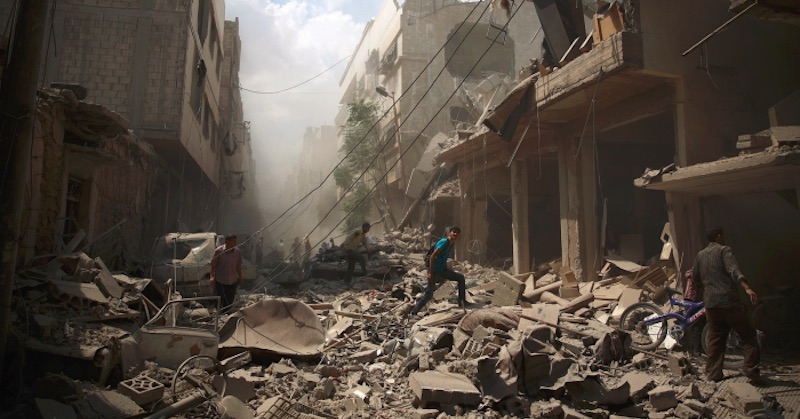 Hey! Do you smell that? That’s the smell of PEACE – not decomposing corpses!

In their boastful “year in review,” the State Department declared bringing “peace and security to Syria” as one of their major accomplishments.

This should come as a surprise to, well, Syria, it’s neighbors, the refugees fleeing the nation and the entire planet, really.

Rather than being in the cozy blanket of “peace” and “security,” Syria is a war-torn hellhole, where ISIS, Bashar al-Assad’s forces and Syrian rebels fight each other, killing anything that moves.

Still, the State Department considers that a “success.”

Here’s how they try to frame their “success:”

The United States and many members of the international community have stepped up to aid the Syrian people during their time of need – the United States has led the world in humanitarian aid contributions since the crisis began in 2011.

Led by Secretary Kerry, the United States also continues to push for a political transition in Syria, and under his stewardship, in December, the UN Security Council passed a U.S.-sponsored resolution that puts forward a roadmap that will facilitate a transition within Syria to a credible, inclusive, nonsectarian government that is responsive to the needs of the Syrian people.

So the State Department is considering their flailing, failed attempts as “successes.” I’m afraid they’re confusing “success” with “hope.”

They also proclaimed they’re winning the fight against ISIS, ensured Iran will not develop a nuclear weapon and saved the planet from global warming.

None of this is true, but success is easy when you include “failure.”

In honor of their “success” in Syria, I’d like to announce my successes in 2015 as well:

Success is everywhere when you don’t know what it means.