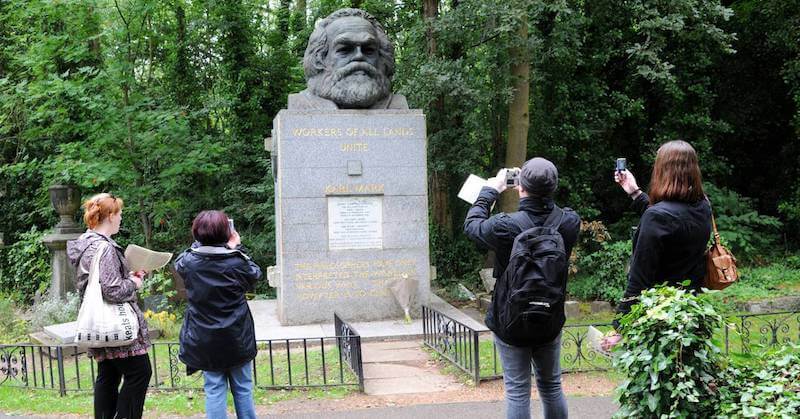 If you’re an avowed communist, or leftist, or Democrat (but I repeat myself), and you’re making a trip across the pond to England, you might want to pay a tribute to your ideological hero: Karl Marx.

The German philosopher whose theory of Communism (applied clumsily) led to the deaths of tens of millions is buried in a private grave in the Highgate Cemetery in north London.

It’s quite a nice place, with a bust of the bearded man and his motto “Workers of All Lands Unite” inscribed on it.

The only problem is that if you want to pay a tribute to the man who ultimately believed in altruistic collectivism – the communal ownership of all property, you’re going to have to pay.

That’s right. The cemetery is private and it’ll cost you six bucks to get in.

Marx is rolling over in his grave.

Before he died in England, Marx eschewed the public gravesites that were offered to him under a version of Socialism – common ownership of cemeteries. So he bought his own burial plot, in a private cemetery.

Of course, the irony is fantastic: The man who advocated for the elimination of private property buried in a private grave that you have to pay a fee to see.

The Wall Street Journal – a paper that is founded on the principles of free-market capitalism, takes particular glee in pointing out the irony. They quote some visitors:

“They do complain, and tell me Marx would be turning in his grave,” said Ian Dungavell, from the Friends group. “But I tell them, it’s redistribution in action, because all the money we generate goes back into the cemetery.”

Some visitors were taken aback at how grand the monument was, given the austere life and philosophy Marx espoused.

“It’s such a bourgeois monument,” said Andrew Carroll, a former cemetery worker, as he looked up at a severe-looking bust of Marx’s giant head.

Another visitor refused to pay the fee and instead comforted himself in the words from Marx Communist Manifesto, which seemed quite appropriate:

When he tried to visit Marx’s grave on that summer day last year, Mr. Gliniecki didn’t even make it past the cemetery’s ornate Victorian gatehouse. Instead, he walked to a park that bordered the cemetery and peeked over fence posts to get a distant glimpse of his political idol. That night Mr. Gliniecki found himself dipping back into Marx’s famous work, the Communist Manifesto. There, as often, he found the words that explained his anger.

There is “no other nexus between man and man than naked self-interest, than callous ‘cash payment,’ ” Mr. Gliniecki read.

What do you think Marx would say about paying cash to see his grave?