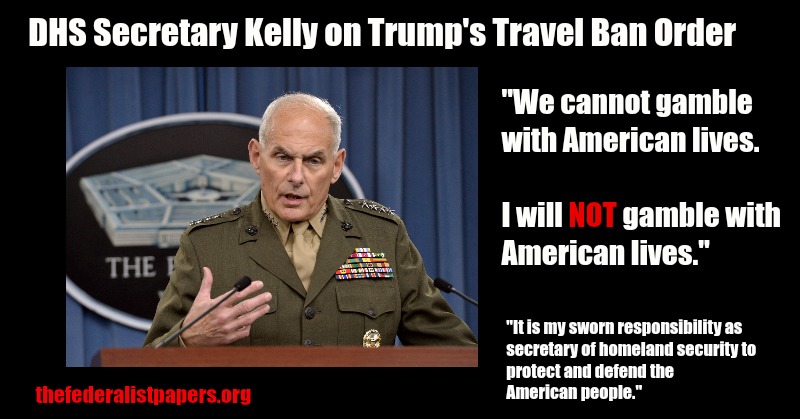 On Tuesday, Secretary of Homeland Security John Kelly defended President Donald Trump’s executive order temporarily restricting the entry of individuals from high-terror-risk countries, noting that a move such as this was “long overdue.”

Kelly discussed the order during a press conference in which he described it as a “travel ban” and made it clear for those who still don’t get basic concepts that it is not a Muslim ban — despite the media’s portrayal of it as such.

“This analysis is long overdue and strongly supported by the department’s career intelligence officials,” Kelly explained in reference to the procedural review that will now be undertaken thanks to the pause.

“As my predecessor, Secretary [Jeh] Johnson liked to say, it is easier to play defense on the 50-yard-line than it is on the one-yard-line. By preventing terrorists from entering our country, we can stop terror attacks from striking the homeland.”

These orders are a matter of national security. It is my sworn responsibility as secretary of homeland security to protect and defend the American people. And I have directed departmental leadership to implement the president’s executive orders professionally, humanely, and in accordance with the law.

The liberal mainstream media tried to push the narrative that Trump acted unilaterally and did not consult with either Kelly or Defense Secretary James Mattis, but at the press conference Kelly pushed back against these claims.

“It was a back-and-forth process. I did talk to a representative in the White House, oh probably, certainly early in the week, about where it was going, how it was being developed,” he said. “I commented that I had seen some of the initial drafts. Pretty busy week, I didn’t get involved in correcting grammar or reformatting the thing.”

Kelly said officials on the Interagency Security Committee, led by DHS, are “looking at various options right now” to develop additional vetting procedures for people applying for visas from the countries affected by the executive order. Trump has repeatedly promised to institute “extreme vetting” of hopeful immigrants and refugees.

The seven countries listed in the executive order, Kelly said, lack the kinds of records keeping procedures “that can convince us that one of their citizens is, indeed, who that citizen says they are and what their background might be,” so the U.S. is considering requesting additional information from visa applicants.

Kelly suggested that the U.S. could request an “accounting of what websites they visit,” “telephone contact information so that we can see who they’re talking to,” or social media information, though he cautioned that “all of this is under development.”

“We will certainly work with countries on this,” he said.