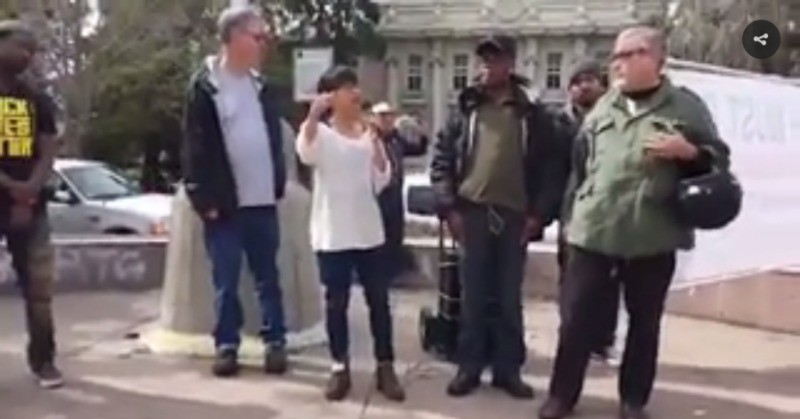 Liberal “antifa” protesters took to Berkeley on Saturday afternoon to voice their displeasure with Trump and his supporters.

One speaker made it clear that those with views deemed to be “problematic” were not welcome at the event, or in America in general.

“If any neo-fascists or white supremacists try to come out today, I want a pledge from everyone here that we will act together, and we will act united, and make it clear to them: They are not welcome. Not in this park, not in Berkeley, not in this country.”

She continued ranting about Trump’s supporters, saying that they should only be able to voice their opinions “from behind a computer.”

“They gotta crawl back to the holes that they came from and hide behind a camera and a computer, and troll if they want to, but we’re not going to let them come out here today or any day.”

For people who are claiming to be “anti-fascist,” they sure are pretty quick to silence any speech that might offend them.

For better and for worse, America is a free country with a diverse bag of opinions, even those held by extremists. We don’t have to respect their opinions, but we do have to respect their right to have and voice them without legal pushback. You can’t just tell them they’re not allowed to speak because of their opinions. Well, you CAN, but you don’t have the authority to enforce it.

The fact that we’re still having to have this conversation in 2017 is frightening. You’d think the idea of free speech would have caught on by now.