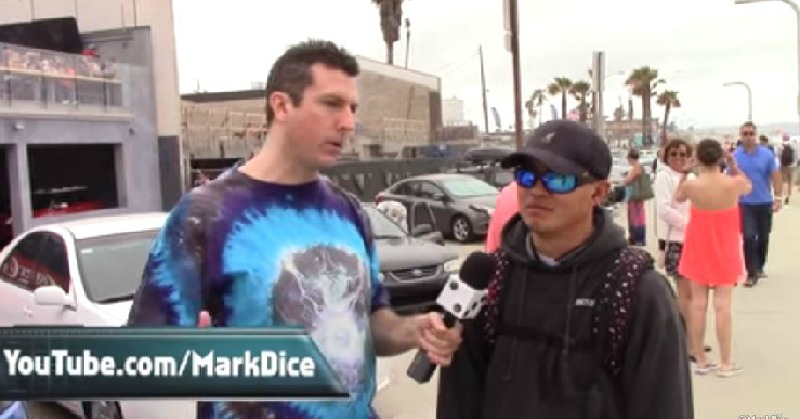 Author and media analyst Mark Dice asked people on the street in San Diego, California what they thought about Barnes and Noble hypothetically — although he asked as if they were really doing it and nobody questioned him — taking out verses from the Bible that are “homophobic” and whether or not they think it’s a good thing to censor the Bible to make it more “LGBT friendly.”

All the respondents Dice featured, except for one, seemed to think that it was a good idea to censor the Bible so that the LGBT community won’t be offended or feel left out. In related news, this also explains the question, “what kind of moron would vote for Hillary Clinton?” So that’s good.

Take a look at the video below, where Dice, who donned a tie-dye t-shirt, shows a big part of what’s wrong with this country and the people that will hopefully forget to vote on Nov. 8:

One individual Dice questioned even managed to bring in free-market concepts — albeit in a mangled, confused, liberalesque kind of way. He asserted that people who don’t like the censorship of the Bible can buy their copy elsewhere. He missed the more relevant point that LGBT individuals who are so “offended” by the Bible can either get over it or choose not to read or buy it.

Theoretically, someone could choose to create their own version of the Bible that is no longer God’s word to be more “LGBT friendly,” (which I find it hard to believe hasn’t been done by some social justice warrior), but that’s not what Dice asked. He asked about censoring the Bible — which is very different than creating another, albeit bastardized, version alongside other versions with God’s word.

After each confused liberal talked about how great it was to censor God’s word — people who probably also think that their free speech shouldn’t be compromised — finally one individual at the end correctly responded that it was wrong: “I don’t think that that’s reasonable. I mean, cause, I mean what they preach in their church is what they preach. That takes away freedom of speech.”

Yes it does, and thank God at least one guy got it right. The sad part is that, along with some of the obviously out-of-it crowd that responded, there were probably at least one or two that were simply afraid to sound “intolerant,” so they decided to respond with intolerance.

Censoring the Bible is the epitome of intolerance. These Left-wing progressives don’t get that you don’t have a constitutional right not to be offended or feel “left out,” or that censorship is an attack on the First Amendment.

Do you think these SJW’s would have responded the same way if Dice had asked about censoring the Koran?