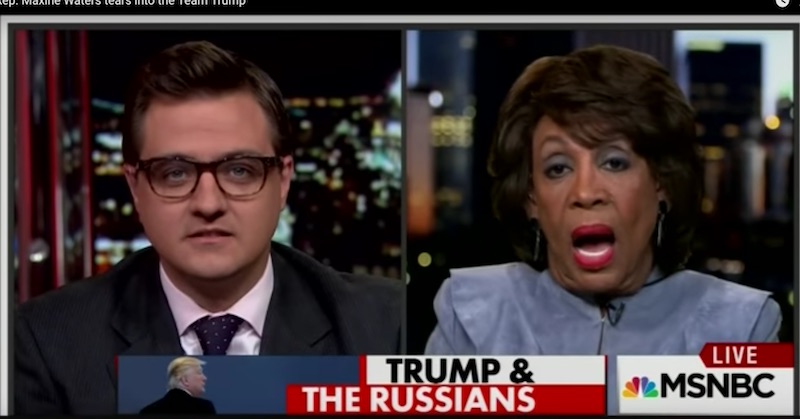 If Maxine Waters is the new face of the Democratic Party, they couldn’t have given Republicans a better present.

The rambling, disoriented California Congressman went on MSNBC for a six-minute diatribe against President Donald Trump and the entire Administration, ultimately calling all of them “scumbags” on national television.

She began by running down a list of alleged ties between Trump’s inner circle and Russian people within the government.

But it all got very strange as Waters became more and more unhinged.

It really bears watching from beginning to end:

Toward the end of her crescendo of spitting anger, she said this: “I just think the American people had better understand what’s going on. This is a bunch of scumbags. That’s what they are. They’re all organized around making money.”

Even the moderator Chris Hayes was taken aback.

“Those are very strong words, Congresswoman. Who are you talking about?”

Waters responded: “All of these people who are organized with the oil and gas interests in the administration and friends of the President of the United States. This back channeling that you see. They’re a bunch of scumbags!”

Hayes interrupted: “Do you mean the Secretary of the United States?”

“I will tell you this,” he said. “[Secretary Rex] Tillerson is there to get these sanctions lifted. That’s why he’s there.”

Boy, oh boy… This kind of screaming nonsense isn’t going to serve Democrats well at all in 2018, that’s for sure.