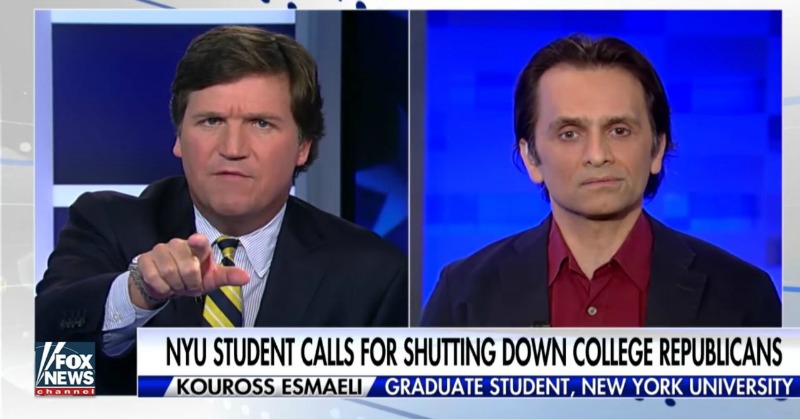 Fox News host Tucker Carlson went to town on a New York University grad student who believes that college Republicans should be silenced.

Kouross Esmaeli penned a controversial op-ed in the student newspaper that suggested that the NYU College Republicans were to blame for the violence surrounding Gavin McInnes’ speech at the school. The riot lead to the arrest of eleven students.

Esmaeli attempting ot take control of the interview by claiming that Carlson is a “free-speech fundamentalist” and immediately jumping into questioning whether Carlson thinks that terror groups should be able to recruit on college campuses. Carlson quickly quashed this “gotcha” question by citing the 1969 Supreme Court ruling in the case of Brandenburg v. Ohio where it was decided that government was not allowed to oppress free speech unless it was directly inciting violence.

But it’s what the student said next that the rest of us are going to have a huge problem with.

“My stance is this: That we do not live in a society in which any speech should or is guaranteed,” he said, adding that McInnes’ speech was “beyond the pale of responsible dialogue.”

How of course that’s ridiculous because we allow all sorts of “beyond the pale” dialogue take place in this country. I assure you this guy would be upset if Republicans tried to get a Black Lives Matter group shut down, saying that their right to free speech is not guaranteed.

But Carlson wasn’t having it. “We cannot prevent people from expressing what they believe. That is the essence of our democratic values — and you don’t seem to understand that.”

Later in the interview Esmaeli repeated the allegation that McInnes compared black people to monkeys, despite providing no proof for his argument.

At the end of the interview, Carlson cut the student’s mic and ended the discussion. While many will view this has “hypocritical,” saying that Carlson is an advocate for free speech yet denied Esmaeli the opportunity to express his opinion, I want you to think of it in another way; Esmaeli was forced to see what it’s like to be on the business-end of the policy for which he is advocating.

Watch the entire interview below: