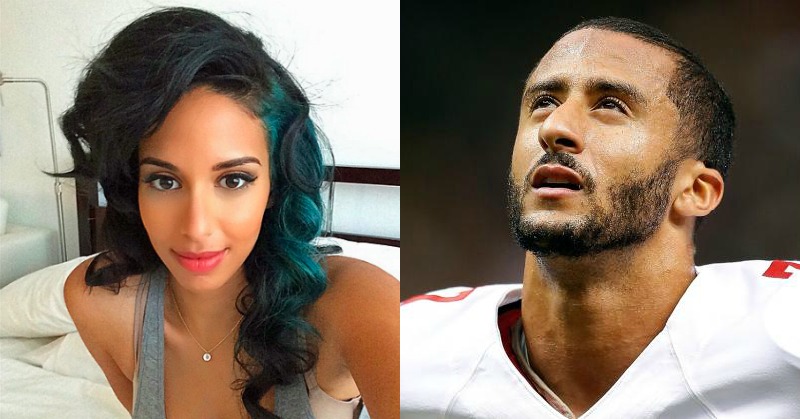 NFL quarterback Colin Kaepernick’s refusal to stand for the national anthem seemed out of character to many fans who wondered where his sudden “activism” stemmed from. This latest development sheds some light.

Terez Owens, a sports gossip site, reported that Kaepernick’s girlfriend may be the reason behind his behavior:

“As the entire world knows by now, San Francisco 49ers quarterback Colin Kaepernick refused to stand for the National Anthem in Friday’s pre-season game against Green Bay because he was protesting “black oppression” in the United States. We’re now hearing that it was actually his girlfriend Nessa’s idea for Colin to protest. Colin and his girlfriend, Nessa Diab, an MTV DJ, are still planning an Islamic-style wedding. During Ramadan, he posted a greeting on Instagram wishing his friends the best for the holiday: “kaepernick7 I know a lot of people who were fasting during Ramadan, wishing you a Happy Eid!” Nessa has definitely been a game changer for Colin. -TO”

Well, that explains a lot. A quick glance at Kaepernick’s Instagram shows a slew of Black Lives Matter-style, anti-American posts, and his girlfriend is no exception.

Diab posted her support of Cuba, which certainly helps shed light on her and Kaepernick’s ill-educated, anti-American views:

You have to appreciate the “#thoughts” hashtag at the bottom, since clearly anyone that supports a violent dictatorship probably should put some more “thought” into their wildly misguided beliefs.

It is ironic, though, that Kaepernick’s girlfriend supports a country where people truly know oppression from living under the rule of a communist dictatorship. Apparently neither of them know what the word “oppression” means.

It truly is extraordinarily sad to watch people, who have opportunities that people around the world only dream of thanks to the God-given rights protected by this incredible nation, disrespect it so thoroughly.

In fact, this spoiled, misinformed couple not only has opportunities that people around the world only dream of, many people in this country could only dream of being so fortunate — and that goes for people of all races, despite Kaepernick’s race-resentment sentiment.

So much for “oppression” huh?

It’s something you often see in spoiled children, but it’s particularly concerning in adults who have a platform to influence others.

While you certainly don’t need to agree with everything America does — people aren’t perfect, that’s for sure — to not acknowledge all the wonderful things about America that men and women died protecting is not only painfully disrespectful, it’s making the situation worse.